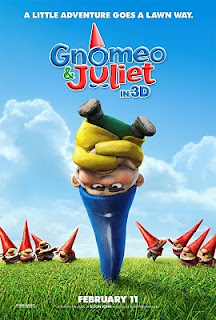 In My Own Words
It's about time someone finally made an animation about garden gnomes. It's been awhile since Noddy was around and everybody loves the gnome from "Amelie". I'm not saying I've been holding my breath waiting for a gnome movie or it's even something which I've thought about at all. When you think about it though, how cool are gnomes? Especially the concept of them coming to life when the sun is down? Having a gnome in the garden is always fun, it's having a little man watch over everything when you aren't there to. It's something you can think about and make up their own stories. They are a fun concept. Keeping this in mind, it's interesting that the first gnome movie in years is based on Shakespeare.

So, I decided the Google gnomes and see what I came up with. Garden gnomes started popping up in peoples gardens in the 1930's as ornaments. Their appearence has a resemblence to the seven dwarves featured in "Snow White And The Seven Dwarves". Disney does it again by showing the effect it has on everyday society! The most shocking discovery was not where they came from or anything in the words. I came across a photo of two gnomes which were doing the naughty deed! And that was on the first display page when I typed in gnomes, I didn't go looking for trouble. It almost makes me a bit worried to look any further as gnomes may not be as clean fun as what I thought they were! What gnomes do when the sun goes down may not be as clean natured and may not be something we all need to know that much.

Review
Like the first gnome we see in "Gnomeo And Juliet" says when he appears on the screen, "The story you are about to see has been done before. A lot..." Yes, yes it has. The story of "Romeo And Juliet" has been done in many different ways many times. One would think that gnomes playing out this version would be adorable, comical and as original as it could be. It is.... a bit, but not a great deal. "Gnomeo And Juliet" is cute and fun, but otherwise quite flat. It plays out in much the same way as people would expect a film based on Shakespeare's tragic love story would. The houses of Montague( the Blues) and Capulet (the Reds) are adjacent houses in suburban England where the owners don't get along, and neither do the gnomes who live in the garden. By chance, the Blue Gnomeo and Red Juliet meet in the land in between their houses and it is love at first sight despite their differences. Gnomeo and Juliet defy their elders by seeing each other, but things are complicated a great deal when one of the Red's is killed in a duel involving Gnomeo and their lawn mowers.

"Gnomeo And Juliet" tries hard to be a blockbuster. It has a stellar cast who have donated their vocal talents for this film and one Elton John who has donated his music and is also executive producer. It tries hard to be original, but that is all it is doing. The film just lacks and doesn't create any lasting impression. It is extremely forgettable and is one of those films in which you leave the cinema after it is finished, and then a few hours later can barely remember that you have seen it. The visuals are great, but they are not spectacular. The screenplay is nothing special, although there are some funny one-liners throughout the film. It's not even entirely clear as to whether "Gnomeo and Juliet" is supposed to be a children's animation or not. It has the simplicity of a children's film, but has many jokes and themes that would not be understood by children.

However, there is a certain amount of creativity to the film. The creation of the gnome garden worlds are certainly clever. Such as their obsessions with lawnmowers on the world wide web, the outside world and their garden friends. The characters are colourful and fun. Gnomeo and Juliet themselves are probably the two most boring characters throughout the film, as they are challenged by Featherstone the flamingo, Nanette the frog, the Red Good Gnomes and Fawn (voiced by Ozzy Osbourne). One of the fun parts of the film is keeping your eye our for Shakespeare references, which pop up along the way and will be easier to find for those who are familiar with Shakespeare's life and his drama.

The problem with "Gnomeo And Juliet" is that it is not quite sure what it is. It is clearly trying to be a gnome version of "Romeo And Juliet", but it lacks the emotion. It is not quite sure who it's target audience is and it is just trying too hard to be successful. There are some good points about the film, but the aspects of a film which make it successful overall are just not there. It is an extremely light and moderately fun watch. A film you would love to remember, but it doesn't help you to do so.
5/10