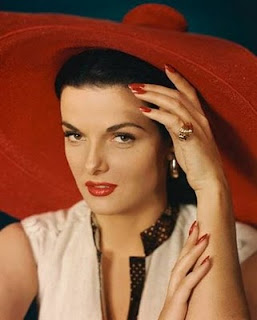 Russell was a 1940's and 1950's Hollywood sex symbol who shot to stardom in her first role in Howard Hughes film, "The Outlaw". The film caused a scandal for using photos of Russell in suggestive clothing and positions, such as this:- 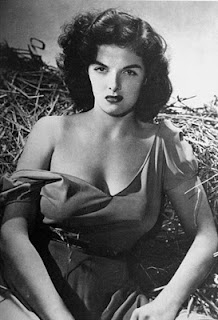 In today's world where almost anything goes and films are able to slot into a number of ratings, it is almost inconceivable to understand exactly what the uproar was about. However, back in the 1940's the censors were extremely tight on their grasp around what could be seen and what couldn't be. Hughes found himseld in hot water with the censors over the the lack of covering there was to Russell's body in the film's promotional photos. Hughes was notoriously known for his love of women, in particular women film stars. In the way that he insisted of having Russell filmed and photographed, one would expect that Russell was one of his girls. In fact, Russell was known as the one Hughes could not get to sleep with him. Needless to say that there were many men who were not upset by how much of Russell Hughes wanted to show. These photos and "The Outlaw" marked a change in the film industry and it's attitude towards images of female sexuality. Russell became a sex symbol overnight.

Her star continued to grow and shine with the release of film's such as "The Paleface" and "Montana Belle". Besides "The Outlaw", her other most popular role was as the brunette in "Gentleman Prefer Blondes" opposite Marilyn Monroe. In this film she begun to be recognised for her singing and dancing talents as well as her acting. The publicity for this film included a hand print ceremony at the famous Grauman's Chinese Theater in Hollywood. Her handprints can still be seen today right next to Marilyn's.

Although Russell was more than often remembered for being one of the greatest sex symbols of the golden years of Hollywood, she also had a softer side. Despite what she represented and her wild ways, Russell was a devout Christian who, in her biography, believed she passed on her faith to other stars such as Judy Garland. Russell works tirelessly to keep Christianity in her family's life and to pass the word on in Hollywood. She was also mother to three adopted children, Tracy, Thomas and Robert or "Buck". She founded the World Adoption International Agency, after she found in during the process of international adoption how hard it was for American's to adopt outside their country.

Jane Russell made her mark on the world and played a vital part in the evolution of women in film. She will be greatly missed and the world mourns another piece of old Hollywood lost. RIP Jane. We'll miss and always remember you. 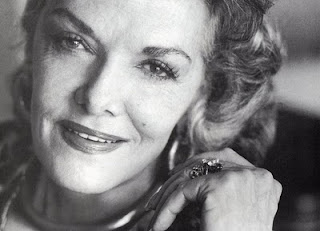