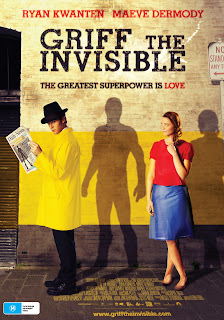 Griff The Invisible
Year: 2010
Director: Leon Ford
Cast: Ryan Kwantan, Maeve Dermody, Marshall Napier, Toby Schmitz
In My Own Words
Now this movie is an example of the reason I watch movies! REAL acting! Roles which take actors who are known for a particular type of role and makes them into a completely different character! What I love about this is that before this role, you may look at that actor and think that they eouldn't be able to drift too far away from the persona of the role which made them famous. In this case, I am of course talking about the lead in "Griff The Invisible", Ryan Kwanten. People outside Australia will know Kwanten primarily for his role as the hormone crazed, Jason Stackhouse in "True Blood". Those who are from Australia, will remember Kwanten in his days before "True Blood" when he played Vinnie in the long running Australian soap opera, "Home & Away". Both of these roles are bad boy roles. While in "Griff The Invisibe", he becomes the introverted, young at heart Griff who knows he is the outcast in the real world. It was so fantastic to see him transform himself. All those who have a crush on Kwanten will crush on him even more after this film as a result of his puppy dog expressions.

"Griff The Invisible" reminded me a fair bit of a media flurry which is going on in Australia at the moment. For those who haven't heard, just a bit over a week ago, the Australian media had a field day with a You Tube clip which showed a young Sydney schoolboy bullying a bigger schoolboy by punching him in the face. The bigger boy suddenly snaps, picks up the smaller schoolboy and throws him to the ground, breaking the bully's ankle. Bullying is a big problem in schools across the world as it can obviously cause physical pain to children, but both short and long term psychological damage. There has been a media frenzy with this You Tube clip, but also a huge onslaught of support for Casey Heynes, the boy being bullied. Both boys were suspended from school, but Casey has seen an enormous amount of support as he finally stood up for himself. I'm not going to go into who is and who wasn't to blame, but "Griff The Invisible" reminded me of this scenario as it showed an underdog who has enough of being bullied and takes matters into his own hands, but ends up getting into trouble for it. However, once people find out who the true bully is, he becomes the one everyone feels sorry for and he becomes the hero. On the Australian show "A Current Affair", Casey was interviewed and when asked "Are you a superhero?", he replied "No, I wish I was". Casey, believe you are a superhero, because to everyone who has watched the YouTube clip (except maybe the bully's family) you are!

Review
"Griff The Invisible" is perhaps the first Australian superhero movie and it is a superhero like no other. Don't expect any corniness or stereotypical heroes in this film, and don't expect to take your superhero crazed children to it and them enjoy it. "Griff The Invisible" is a very cute, feel good, but often quite a emotional film. It's the superhero movie that isn't about a superhero persona, it is about the real person. Griff (Ryan Kwanten) is a customer liaison officer by day and superhero by night. He is tormented and bullied in the workplace for being offbeat, anti-social and quite unsettlingly strange. Although he is hurt, he knows it doesn't really matter because they don't know who he truly is. He is happy with his lonely life which his brother, Tim (Toby Schmitz) occasionally pops into, until Melody (Maeve Dermody), the pretty, young scientist enters his life.

"Griff The Invisible" is more about the person behind the superhero alter ego than what goes on when they put the mask on. The characters of Griff and Melody are brilliantly written. They both ooze with charisma and character and because of them, the film feels very real. The dialogue written for Melody is fantastic and makes her so likable. Griff is likable from the very beginning of the film and completely relatable. You feel his triumphs and feel his pain. Ryan Kwanten pulls off the character of Griff and makes everyone fall in love with him (who hadn't in "True Blood"). It is so great to see an actor challenge himself with a different role and give such a stellar performance. He plays the part perfecting and brings so much emotion to a part which without him, could have just been dull and lifeless. Maeve Dermody is also so sweet in this role. A true actress can act just with her facial expressions and have these expressions make you hear what she is saying.

The other good thing about this film is it brings up very real issues such a bullying and also about the young at heart. Nobody should change the young of heart if they are happy in the bubble they live in. However, "Griff The Invisible" is very slow at times and you really don't know where the film is going at times, which can be a tad frustrating. It also doesn't have a distinctive beginning, middle and end, which isn't too much an issue in film these days, but it doesn't do anything for the people who want suspense in their movie. The score is perfectly fitting to the film and adds to the emotions and feelings each scene provokes.

"Griff The Invisible" is a sweet film with a real underdog as a hero. It takes the underdog hero and tears him right down to the nitty gritty, which is what a typical superhero movie doesn't do. It is a completely refreshing film in the superhero genre.
7/10