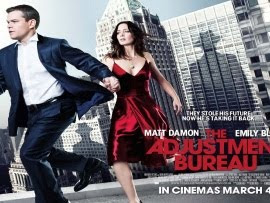 In My Own Words
When we were walking out of the cinema tonight, my husband and I had a discussion about Matt Damon, which turned into a heated discussion about the Oscars. Firstly, we were discussing whether Matt Damon will ever win an Oscar. Of course, he has already won one with his lifelong friend, Ben Affleck for Best Writing, Screenplay Written Directly For The Screen for "Good Will Hunting" in 1998, but it is the elusive acting Oscar which he has become a chaser of. Damon has now been nominated for this award twice and still hasn't been able to catch up to it. Damon is an interesting actor. He is well known for his action roles such as Jason Bourne in the Bourne films, he likes the roles which are anything but ordinary such as in "The Informant!" and he can pull off the dramatic roles as well, as he showed in "Invictus". Whether he catches it will have to do with his choice of roles.

Which brought me to my second point of discussion, I don't believe any actor enters the acting profession purely to win an Oscar. I doubt if you asked Meryl Streep or Jack Nicholson "Why did you start acting?", they wouldn't say "To win an Oscar". An Oscar is the ultimate prize, but it is not the be all and end all of an actor's career.The very large majority of actors out there will never win an Oscar or even be nominated. I'm not entirely sure that when an actor who hasn't been nominated for an Oscar or any other award before performs a role which they believe they have put a great deal of effort into, do they hope an award will come to them, whether it be an Oscar or something of smaller value? How about the ones who have been nominated for an Oscar before, do they keep another nomination in the back of their mind when they perform a role which they think may have a chance? I'm not saying this is something every actor will think about or that Oscars are a means to an end or even that every actor cares about being awarded. I strongly believe that actors are artists who act because they love it and it's their means of expressing themselves and they are fortunate enough to make a living out of something they love. I can't help but wonder though, if you are nominated for an Oscar and do not win, do you have a thirst to be nominated again for chance of winning? I'm sure there would be part of them that would want this. It is only humour nature to chase what was so close yet so far away.

Review
"The Adjustment Bureau" is an interesting film. Yet like many other science fiction films which cross over with action films, it is very far fetched and as a result it can just seem quite silly. The idea for the film is clever and really quite intriguing, but it could have gone so much further than what it did. There were so many points in this film that could have been delved into more and quite a few gaps in the story as a result of some complex subjects addressed. Matt Damon is David Norris, a young congressman who is running for the US Senate for the state of New York. When he loses his campaign first time round, he meets an intriguing and beautiful woman, Elise (Emily Blunt) who makes him feel a way he never has before. He meets her by chance again, only to be informed afterwards that Elise is not part of the plan. The plan is the way the world and the people in it are supposed to go according to The Adjustment Bureau, the people who make sure everything goes the way it is supposed to. David tries to defy the plan and do everything he can to be with Elise, even if it means risking his life and his sanity.

"The Adjustment Bureau" was an ambitious project to take on for director George Nolfi. There is so much to this film. There is romance, drama, science fiction and action, as well as a subject matter which has to be explained in great detail and emotions which have to be addressed. It really is a huge project and one cannot blame Nolfi for missing out bits and pieces throughout the film. Many questions remain unanswered at the end of the film. For example, why do plans change throughout people's lives? If David had a angel or guardian in Harry, then why didn't Elise have one as well? If it wasn't part of the plan for these two to be together, then wouldn't there be someone on her side to keep her away from him working there as well? However, there was a lot to cover in this film so leaving a few questions unanswered didn't hurt a great deal. Many questions were answered as well which allowed the film to maintain momentum and the audience to remain interested.

A big misconception about this film is that it is just like another Bourne film. Although the film does have suspense and a few car crashes and chases in foot, it can hardly be classified as an action film. If it was classified as an action film, it would fail miserably. The concept of having a God like figure who's disciples work with mechanical means to place ideas in people's minds and scan their brains is slightly ridiculous. The whole concept of a force being behind what happens in everyday life is quite fascinating and does challenge you to think more about fate and chance. The story is well written, but the dialogue can be a little sketchy at times.

Matt Damon and Emily Blunt have quite a lot of on screen chemistry in this film. They respond well to each other and physically look the part fo a couple in love. They both give emotionally charged performances showing how in love the two characters really are with each other. Although the charcaters really don't see each other much during the film and normally a film where they don't see each other too much over the span of the film it seems unrealistic to understand how they feel so strongly about each other, it feels right that they should love each other so much. Both Damon and Blunt are extremely likable in their roles and both have a great amount of character. Because of these two, "The Adjustment Bureau" feels more of a romance than an action film.

George Nolfi gives "The Adjustment Bureau" a fair go. It could have gone a lot further and the ending coould have also been a bit more conclusive and satisfactory, but there are some very good aspects. Damon and Blunt bring the characters to life and the film is actually quite thought provoking. An interesting take on the ways of the world.
6.5/10