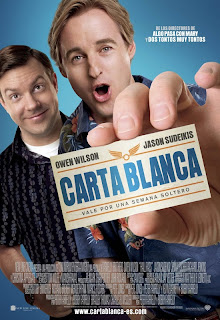 In My Own Words

You've got to love the type of comedy which "Hall Pass" is. Actually no you don't. It's not everybody's type of comedy. It's honestly not mine. It's like I always say though. A good film will break through the genre mould and make people who don't like that genre normally appreciate it. I'm not one for crude, toilet humour and there are a lot of people out there like me. Yet, there are some films from this sub-genre of comedy that I do appreciate, such as "The Hangover" and "Hot Tub Time Machine". Mind you, I thought "The Hangover" was quite tame as opposed to other films it's placed in the same pool as. So my theory is that you have to give every film a chance, whether you don't think you would like it or not. If you don't like the film, you bask in the glory of knowing that your suspicions were correct and if you were wrong, you get to enjoy the film! So you win either way!I'm not telling you to go out and see all the movies you don't want to see as it may result in you being quite irritated and feeling like you have a wasted a considerable amount of money. My point is that you never know when you will find a hidden gem. Unfortunately I did not feel this way about "Hall Pass". Not a hidden gem for me, but at least I feel as though I was proven right by thinking that it wasn't my type of movie! At least I didn't feel as grossed out when I came out of watching "Van Wilder: Party Liaison". This was tame compared to that.
These are my own words and here is my review

Review
A hall pass, in the traditional sense, is an exclusion from class. In Bobby Farrelly and Peter Farrelly's new movie "Hall Pass", a hall pass isn't the exclusion from class, but the exclusion from marriage. Rick ( Owen Wilson) and Fred (Jason Sudeikis) are two men who feel they are stuck in the rut of their marriages and are longing for the single life. Feeling their husbands frustration, Maggie (Jenna Fischer) and Grace (Christina Applegate) decide to give them both a hall pass, so they can have a week off from marriage and do whatever they need to do. So the two men set off on a week of what they think will be week of lots of sex and girls. What one can imagine from this description is that, yes, there will be lots of dirty references and nudity here and there. It is not the type of comedy you would take your parents with you to see.

However, "Hall Pass" does come across as though it is trying to be really funny by using jokes that have all been done before and just aren't quite as shocking as the Farrelly brothers try to make out. There are very few laugh out loud moments in this film considering it is a comedy. The script is quite weak and quite random, as several jokes just come out of nowhere and have no real relevance to what is happenning at that point in time. It really feels as if the film is trying too hard to be funny and the jokes are very forced. for example, Fred's scene with the girl in the bathroom. If one has to result to something like that for a laugh, you know they are struggling. Also, Fred's scene in the car at the beginning which we have seen in so many films over the years that it no longer has shock value and is simply a silliness value. The film itself actually feels quite forced and as a result feels very jerky. After the Farrelly brothers have shown what they are capable of with such films in the past as "There's Something About Mary", it is a real disappointment to see a movie like this from them when comedy is meant to be their forte.

The acting in "Hall Pass" is really very average and badly directed. The majority of the acting felt as forced as the jokes in the film. Owen Wilson and Jason Sudeikis don't seem natural at all in their roles. One would think that a man who feels like he is trapped in his marriage and wants to have some time to relive his single life would be an easy role to play and would be a character that would be completely relatable to many people out there, not just men. However, the way the Farrelly brothers direct these two just depicts two pathetic creatures who are over-exaggerated and simple. The way both Wilson and Sudeikis portray their characters is more the fault of the Farrelly brother's direction of them rather than their acting abilities, as both actors have shown in the past that they can act and are great comedy actors. The on screen relationships of Rick and Maggie and Fred and Grace are also very weak with no chemistry between the two sets of actors. Once one confesses their undying love to the other, you think "Really? Is that how you really feel?". And when the film finished, how much do we really know about Fred and Grace, besides what we have seen in the movie? Very, very little. Probably the best part of the film is the "bromance" between Rick and Fred, as Wilson and Sudeikis seem to just bounce off each other.

There is nothing new under the sun, and "Hall Pass" proves that. All the jokes are completely unoriginal and not very funny. Every year there seems to be a number of majorly publicised comedies which come out and are just not very funny, and this is one of them.