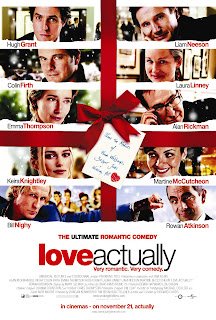 Now this is the movie I have had the most requests for the review this Christmas season, so I should be hearing a lot of cheering from outside my window when this review goes live!

Love, Actually is one of the most popular and successful Christmas films of the past decade. There are so many reasons why it is so successful. It is a romantic, feel-good movie that appeals to both males and females and is genuinely funny.  All this in a Christmas movie would normally be ultra-corny, but in Love, Actually it is just beautiful.

So where do you start?

Love, Actually is a multi-protagonist film, which means that there are several main characters and each of these characters have their own story. As is a fairly common in this type of film, all the characters are somehow linked. There is Daniel (Liam Neeson) who has just lost his wife, David (Hugh Grant) who is the new Prime Minister, Sarah (Laura Linney) who is in love with her work colleague, Jamie (Colin Firth) who has just found out his girlfriend is sleeping with his brother, Karen (Emma Thompson) who suspects that her husband, Harry (Alan Rickman) is having an affair and Mark (Andrew Lincoln) who is in love with his best friend’s wife, Juliet (Keira Knightley).

But…….the question on everyone’s lips is….will aging rocker, Billy Mack (Bill Nighy) has the number one song at Christmas with the catchy and ridiculous, “Christmas Is All Around”?

If you haven’t seen Love, Actually, from my above plot summary you are probably thinking that the movie just sounds a bit messy. It is anything but. Director, Richard Curtis gives each character the same amount of screen time and the best thing is, you feel an emotional connection to each of the characters. That is something that is hard to grasp in your straight forward film, even harder in a film with as many characters as this. However, there are tears of triumph, happiness and sadness for all in the film.

During the film, there are so many unforgettable moments. You will never hear “Jump For My Love” again without thinking about a dancing Hugh Grant. “Love Is All Around” will always ring of “Christmas Is All Around”, the song that opens the film with obscenities from getting the two songs mixed up.

It does set high romantic standards for everyone who watches it, which could be dangerous. Who doesn’t want the perfect moment at Christmas though? Love, Actually just brings them to the screen!

There is no one star or standout performance in Love, Actually, but many. Bill Nighy as Billy Mack is absolutely hilarious and so different from any of his other roles. Hugh Grant is an absolutely charming Prime Minister who you wish you could vote in to parliament. Colin Firth is just wonderful and his restaurant scene is what every woman dreams of. Emma Thompson and Alan Rickman work so well together, even when they are having marital problems on screen.

Thomas Brodie-Sangster plays young Sam who has just lost his mother, but is also the victim of his first love. He is an absolute scene stealer, even with Liam Neeson by his side, who is also wonderful.

Love, Actually is a one of a kind film and the fact that it is a Christmas film makes it even more likable. There is so much beauty as well as humour in the film. It is the best Christmas film to have been released in the last ten years…actually.
9.5/10
Posted by NP1982 at 2:14 AM