As my post about the Top 10 Movies To Influence Fashion was such a success, I thought I would present a list of another fashionable topic.

There are some beautiful, memorable images of actresses in film in some amazing dresses.  The film may not even be as memorable as the dress, but as a girl, it is only natural to see an actress wearing a beautiful dress and want to look like that yourself…if you have somewhere to wear it!

I figure that we all have different tastes and not all of the dresses that I think should be in a certain place in a list of a certain number will be what everyone agrees on.  So the following is a list in no particular order of dresses in film which I think are the most memorable.

Audrey Hepburn in Breakfast At Tiffanys 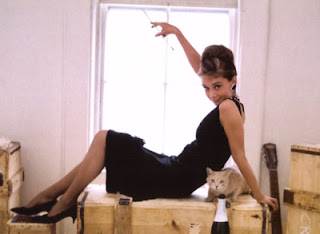 Now I know I just said that this list is in no particular order, but when I think about dresses in film, the little black dress in Breakfast At Tiffanys is the first one that springs to mind.

Audrey Hepburn’s image will always represent class and fashion. There is no image more fashionable than that of her at the beginning of Breakfast At Tiffanys in the long black dress, pearls and big sunglasses, getting out of a cab at New York’s Tiffanys store.

What makes this image of her so appealing to women and has done now for over 50 years, is that she looks a million dollars, but it is also a style that every girl can replicate. Throughout the film, Audrey don’s a variety of black dresses as her character, Holly Golightly, each gorgeous and classy. The little black dress has become a staple of a girl’s wardrobe and is something you can dress up or down for day or night.

This dress was designed by Hubert de Givenchy, who designed many of Audrey’s beautiful dresses over her career. 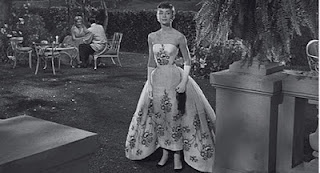 Audrey Hepburn in Sabrina
Audrey makes her second appearance on this list with the beautiful gown she wore in Sabrina as the titles character to meet her long time crush, David at his party.

This dress is a dressmaker’s dream. It could be a party dress, prom dress or a wedding dress. It is a stunningly exquisite dress, but at the same time is not overdone. The way Audrey glides into the party just adds emphasis to the beauty of the dress. Her image is just dazzling and her beauty captures the heart of the man she has always had a crush on and even his brother.

Isn’t that the way every girl wants to feel when they enter a party? That the world just stops because of her and her beauty?

The concept for this dress was first thought of by legendary studio costume designer, Edith Head. 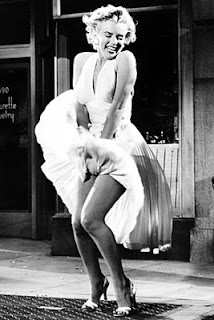 While you may not want your dress to fly up, Marilyn Monroe is a cultural symbol of beauty and female sexuality. This image sent men mad in the 1950’s when the movie was released and enraged Marilyn’s then husband, Joe DiMaggio. Yet, even though Marilyn did many other movies and appeared in many other dresses during her film career, when you see a Marilyn impersonator, it is this white dress that you will more than likely see them in.

Again, this is a completely timeless dress and although it does have a touch of nostalgia about it, the halter-neck style never goes out of fashion.

This dress was designed by William Travilla. 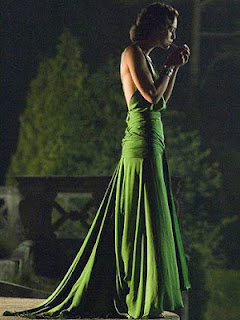 Atonement may be set in the 1930’s, but this dress belongs in another time, yet seems extremely appropriate for the night in which the dress worn is set in.  It is extremely sexy and sensual and a perfect fit for the minutes of passion between Cecilia and Robbie. Yet, it is very glamorous. The most striking feature of the dress is its deep green colour. It is quite unusual as it is not normally a colour dress that you would see in a movie, but it works and creates a lasting impression in your mind.

This dress was designed by Jacqueline Durran, who was also nominated for an Academy Award for her costume design in Atonement. 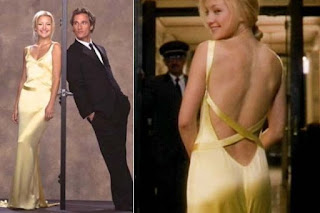 Kate Hudson in How To Lose A Guy In 10 Days
This decision of mine will certainly seem left field to many people, but it is one of the gorgeous dresses that springs to mind when I think about dresses in film.

What makes this floor length, glossy yellow dress that Kate Hudson wears in the comedy, How To Lose A Guy In 10 Days so memorable, is that it is not only sleek and beautiful, but it proves that yellow is not a colour to be afraid of! Yellow doesn’t normally spring to mind when you think about the colour of dress you may want to wear, but this yellow is light and edging on towards gold. Kate Hudson pulls the look off perfectly and her character, Andie leaves Ben (Matthew McConaughey) gasping for air.

This dress was designed by Karen Patch.