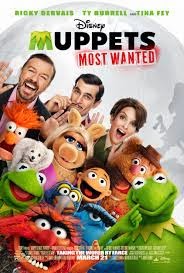 Muppets Most Wanted wastes no time in letting you know that it is a sequel with a song and dance to celebrate that fact and one verse reminds you that the second is rarely as good as the first. This could be translated as an interesting tactic to help viewers avoid this all too familiar reaction to sequels with the latest Muppets film. It may not hit the heights that it's 2011 predecessor did, but Muppets Most Wanted is still a lot of fun and gives you more than one reason to laugh.

Muppets Most Wanted picks up right where The Muppets left off on Hollywood Boulevard after the gang have had an incredibly successful reunion. Kermit (voiced by Steve Whitmere) decides with the persuasion of Dominic Badguy (Ricky Gervais) that the Muppets should go on a world tour now that they are all back "together again" (cue the music). Badguy suggests that they start their tour in Berlin and it is here that Badguy makes his bad guy ways known as it turns out that he is in league with the most dangerous frog in the world, Constantine who has just broken out of a Siberian prison. Kermit is mistaken for Constantine and he is sent back to the prison and Constantine takes his place as head of the Muppets. Badguy and Constantine are carrying out an elaborate plan to make themselves rich which in turn will bring down the Muppets unless Kermit can make it back in time. 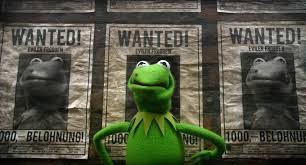 Although this film is a self proclaimed sequel, it's hard to call any Muppet movie this as it is the latest in a substantial list of Muppets films. However it does follow straight on from the 2011 film so the sequel tag may seem more of a sequel to not, but generally Muppets movies can be classed as stand alone films and with the exception of the beginning scene and the inclusion of Walter who joined the team in the last film, this film is pretty easy to look at without using the 2011 film as a comparison. If we must though, Muppets Most Wanted seems like a very different film to The Muppets. It's missing it's emotional edge and isn't quite as wholesome, but this is okay.

This time the Muppets are taking a darker approach (as dark as you can get when the Muppets are involved anyway) and there is a bit more of a mystery and thriller aspect to it. The story is unique to the Muppets sphere, but what is still present in this film is type of fun that the Muppets never fail to bring to their screen escapades. Their humour is incredibly random and often very corny which has always worked for these lovable characters. There are many giggles to be had throughout the film and the ever present various cameos are also very funny. There are no lack of celebrity cameos from the beginning to end and this is part of the fun of the film. As the Muppets are on a world tour, there are various cultures represented in the film and each one of them exaggerated, which is also very funny and none of which should be taken seriously. The cultural exaggerations of Spain are perhaps the most over the top and in turn, also the funniest.

The script is fine, but does not offer much character development or background to the characters. Truth be told that is not really something you would expect out of a Muppets film, but one has to wonder about those younger children who are coming to the cinema and not knowing a great deal about the Muppets as they did not grow up with them the older watchers did. Yet the children in the audience are not bothered by things as trivial as this in their cinema experience. The songs of the film are a downfall. For how many there are throughout, they are not tremendously catchy and slow down the film a great deal with their insignificant placement. The opening song entitled "We're Doing A Sequel" is perhaps the best song of the lot and opens the film in perfect fashion with a bang.

All the voice actors do well, but you wouldn't expect any less really. The character of Constantine is brought to life with a very funny and heavily accented voice by Matt Vogel. Huge credit has to be given to the voice actors Steven Whitmire, Eric Jacobson, Dave Goelz, Bill Barretta, David Rudman, Matt Vogel and Peter Linz, as all of them give a voice to more than one character. Each of these actors therefore show an amazing amount of vocal versatility and talent. 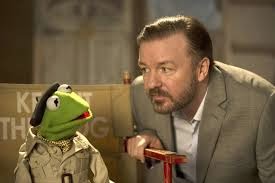 Ricky Gervais plays a bit of a dud bad guy really. Although his actions are evil, he doesn't make the audience dislike him in a huge way. Here perhaps a bit more character development should have come into play. It is assumed Gervais' character is not supposed to be comical, but this assumption is only made as he really isn't funny at all. On the other hand, Tina Fey is hilarious. She truly dips into a completely different character by adopting a new attitude to accompany her Russian accent as Nadya. She is a great joy to watch in this film. Ty Burrell is also very funny and again, plays a great character in Jean Pierre Napoleon. Gervais' character would have been far more interesting if it did have more character.

Muppets Most Wanted is a must see for any Muppet fan and for those who love their humour light and random.