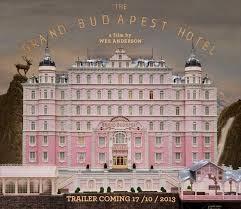 The Grand Budapest Hotel will be released in Australia on the 10th April and is distributed by 20th Century Fox. Now showing in the United States and United Kingdom.

Wes Anderson's latest piece of cinema, The Grand Budapest Hotel is absolutely nothing short of grand itself. There is so much to marvel at during a viewing of this quirky but brilliant film. So much that you feel as though you need to watch it again just in case you missed something the first time around, and this is no bad thing. The whole film is a beautiful piece of art thanks to it's amazing visuals, extraordinary cinematography, interesting characters and wonderful screenplay.

While a young writer (Jude Law) is staying at the tired and rundown Grand Budapest Hotel, he meets the hotel's owner, Mr Mustafa (F. Murray Abraham) and enquires how he came to own the hotel. Mustafa tells the young writer of how he was a lobby boy (played by Tony Revolori) at the hotel between the wars and developed a close friendship with the concierge, M. Gustave (Ralph Fiennes). The intriguing tale of how these two became so close is one of theft, murder and adventure. 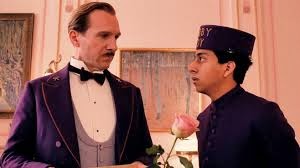 This is absolutely Wes Anderson's most visually beautiful film to date. There is not enough that can be said about the incredible production design employed in The Grand Budapest Hotel. Each shot is a unique piece of artwork carefully designed to create both awe and intrigue in the viewer.  From the very first scene in the cemetery, you are completely enthralled by how interesting the location is and the interest stirred in this opening continues throughout the film. The models of the hotel itself and of the structures among the mountains are just exquisite and somewhat playful at the same time. What does strike you watching the film is how neat and clean cut it is. Everything in the background of each shot is perfectly symmetrical from the pigeonholes at the hotel's front desk, to the prison beds to the formation of the soldiers on the train. While many of the shots employed are not uncommon in Anderson's body of work, this is the best use of his signature techniques thus far.

Before The Grand Budapest Hotel was released, there were several instructions sent out to the cinemas who would be showing this film. These instructions included using widescreen in panoramic shots and shortening the screen in others, a great technique as it draws the audience into the picture more. The musical score is also extraordinarily intriguing, particularly in the parts of high tension when the music would have you believe you are watching a horror or thriller film from the 1930's. The Grand Budapest Hotel is also extremely atmospheric and nostalgic of it's time and place in an unique fashion. You can smell the scent of the hotel in both it's glory days and it's harsh times, as well as feel the cold and harshness of the conditions in the European state of unrest.

The screenplay, based on the writings of  Stefan Zweig, is also very good. Through the film you know where it is heading, but you don't know how it is getting there and the way it gets there is not as interesting as the visuals, but still extremely entertaining. People familiar with other Wes Anderson films such as The Royal Tenenbaums and The Darjeeling Limited will know that Anderson's brand of humour is not the stereotypical Hollywood humour, and that this unconventional, quirky sense of humour may strike some members of the audience as weird and dull. However, the ones who do appreciate this quirkiness will be pleased. There are not many moments where you feel like rolling on the floor laughing, but are many amusing pieces of dialogue and comedic timing by the performers. 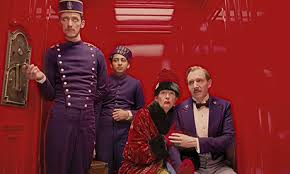 The Grand Budapest Hotel has an impressive stellar cast, many who have worked with Anderson before and again perform well under his guidance. Ralph Fiennes is wonderful as M. Gustave. He has a tremendous amount of character and although some of his practises are questionable to say the least, he is very likable. His entertaining dialogue is delivered exquisitely with perfect timing and emotion where called for.

An unrecognisable Tilda Swinton's role is somewhat brief, but her time on screen as Gustave's much older lover is definitely memorable.It is a pleasure to see F. Murray Abraham on screen, as his charisma gives off an air of respect and importance, although in the most subtle way. Adrien Brody and William H. Macy are the villains of the story and are really a lot of fun, particularly Macy.

The Grand Budapest Hotel is an absolute cinematic treat. There is real fun to be had with this film and if you love Wes Anderson's unique film making style, this is nothing short of a masterpiece.