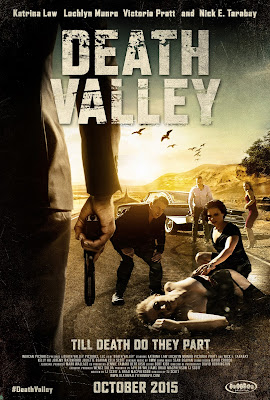 Death Valley will be available in the United States on October 20 on DVD and VOD.

Death Valley is a clever psychological thrill ride that surprises and outsmarts right till the end and mesmerises with it's stunning visuals of the rugged landscape. After a wild night which results in a an impulsive dash to Las Vegas for a shotgun wedding, the joyous road trip takes an awful turn when they hit a woman alone in the middle of the road with a gun pointed straight at them. When it is realised that they have killed the woman instantly and their car is no longer drivable, opinions are divided regarding what they should do between Hollywood heavy-weight Billy Rich (Lochlyn Munro) and his little muse Annie (Katrina Law), and married couple Jamie (Victoria Pratt) and Roy (Nick E. Tarabay). As the heat starts to mix with the alcohol and other chemicals the four have ingested, personalities start to clash, paranoia sets in and cracks start to show in relationships leading to the conclusion that there is more than one way to die in Death Valley.

Tense and unpredictable, Death Valley is wonderfully thought provoking and intelligent. It teases it's audience by allowing them to believe that they are aware of all the characters flaws and motives before slowly revealing itself just as the characters are showing their true colours. The film's haunting nature leaves a lasting impression with it's air of dread and danger which is a result of both the remote location and the tricks it can play and the underlying themes. The actual Death Valley is, as it's name suggests, not the safest place on Earth to be stranded and with the assistance of drugs and alcohol heightens the stress and emotion of the experience. For some it means not taking the situation seriously and others not being able to handle the stress of the situation, but for everyone it means the experience is one of high emotions and it becomes not just the heat that is the danger, but each other.

The evil lurking underneath picture perfect Hollywood is also exposed in Death Valley. On the surface, the Hollywood lifestyle is what everyone wants with it's money, success and parties, but underneath it can sometimes not be as attractive as it seems. Once away from their lives which exist in Los Angeles, the characters realities are exposed and nothing and nobody is what they seem. This leads one also to contemplate how well we know the people we are with, as in Death Valley it seems as though each of the four believe they have the others figured out, but they are far from the truth. T. J. Scott's direction is exquisite and he works with the elements to perfection. The extreme heat and aridity of the desert radiate off the screen using the appropriate cinematography for the location. Yet despite the pain and suffering that is attached to Death Valley, the film also captures it's beauty with some incredible shots of the rugged landscape. The soundtrack by Sean and Juliette Beavan (who also plays the doomed Holly Fields) is extremely enigmatic and fitting for the film.

The character development of the individuals in the film who are part of the unfortunate journey in Death Valley is strong and extremely well done. Each of the characters change and open up to who they really are during their trek across the desert and their pasts and true selves are revealed. When we first meet Lochlyn Munro's Billy Rich, he is arrogant and rather unlikable, but little by little he reveals his insecurities and becomes more endearing as the film progresses. Katrina Law's Annie is much the same, as she starts off making everyone believe she is a ditzy Hollywood starlet, but she is so much more than that. Law has the wonderful ability to play a number of different roles within one character. Victoria Pratt gives an incredibly emotional performance and is incredibly strong in her role as Jamie, as is Nick E. Tarabay who has so many facets to his performance that he appears to be terrifying in himself.

Death Valley comes to symbolise the relationship between dangers of the land and the intensifying of dynamics between individuals. It is a terrifying in the best of ways and unpredictable till the very end.