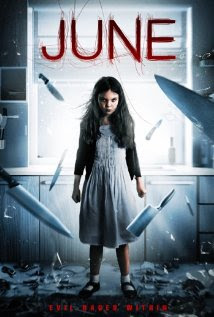 June is now available on DVD and VOD in the United States and Australia.

June takes the somewhat tired horror cinema concept of evil spirit possession and breathes unexpected new life into it. With a young title character who is both sympathetic and terrifying simultaneously, L. Gustavo Cooper exquisite film making enables the creation of a horror film that is suspenseful with a welcomed emotional edge that sets it apart from other films of it's genre.

As a baby, June's (Kennedy Brice) parents offered her as a sacrifice in a cult ritual that went horribly wrong and the result was the supernatural being, Aer entering June and using her body as a vessel. At nine years old, June is being moved from home to home as a result of the strange and dangerous happenings that occur when she is around and her extreme introvert nature which immediately makes her an outsider. When she is fostered by Lily (Victoria Pratt) and Dave Anderson (Casper Van Dien), it seems as though she has finally found the perfect home with a loving and understanding family. However, June's past is about to catch up with her and the terror is only just beginning.

On first glance, June may draw comparisons to a number of other films of the horror genre including Firestarter, The Exorcist and Carrie, but it has it's own sense of identity and originality. June is continuously fighting the spirit, Aer within her and struggling to find which parts of herself are actually her and which are Aer. June is a story about finding out who you really are and fighting against your inner demons to overcome the obstacles that are preventing you from being yourself. However, this does not prevent the film from being extremely suspenseful and terrifying at times. The empathy that one has for June and her situation only makes the suspense greater as nobody wants to see someone so young who has had so much sadness in her life be the subject of these dreaded supernatural occurrences.

Cooper's film making style shows hints of Alfred Hitchcock, especially in regards to his use of montage in the opening sequence and range of camera shots throughout the film. June is really a beautifully shot film with some exquisite shots of nature and intriguing camera angles. The beauty of the nature shots forms an extreme contrast to the mayhem of the rage scenes in the film, symbolising the opposites of June and Aer. The original musical score by Sean and Juliette Beavan (who also plays the Priestess in the film) adds to the atmosphere of the film and it's versatility supports the two sides of June.

Kennedy Brice is perfectly cast in the lead role of June. June is an extremely complex character as her possession by Aer is not all-encompassing of who she is and is something she fears and dreads as much as anyone else, which is unique in a horror film about possession. From early on, June is established as a poor little girl who is aware that she is not only different, but also dangerous and keeps her distance from people for fear of hurting them. June is a particularly relatable character for this reason, as many people have a part of them that they are afraid will lead to someone being hurt if they expose them to it, whether it be something from their past or a condition they have. It is an unique thing to find such a character in a horror genre film that can be so relatable. One understands how Lily can form such an attachment to her as there is an immediate sympathy felt for this poor little girl who wants so badly to be loved, but is afraid to. Brice evokes this sympathy from the audience superbly and manages to be sweet and lovable, yet terrifying.

Lily and Dave Anderson, who are portrayed by Victoria Pratt and Casper Van Dien, are the perfect parents for a troubled child like June. Pratt's performance is incredibly emotional and heartfelt and she provides a maternal and nurturing side to Lily that makes her extremely likable. Van Dien's Dave is a character that one also feels sympathy for as he really has done nothing wrong and seems completely reasonable, but feels the wrath of Aer who he believes is June.

June has greater depth and character than many of the other films it is pooled with and compared to in the horror genre. Well made and tightly written to encompass emotion and suspense, June pleasantly surprises and pleases.