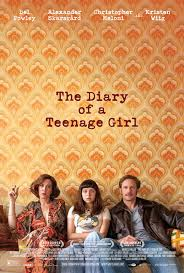 The Diary of A Teenage Girl is now showing in limited release in Australia and is distributed by Sony Pictures.

The Diary of a Teenage Girl is a confronting expose of one adolescent's sexual awakening and swift transition into adulthood that is both powerful and frightening. However, it captures the mindset well of a young woman who believes she is worldly, but is still naïve about the distinction between love and sex, while also embracing the concept of how children subconsciously imitate their parents behaviour. Marielle Heller's film based on the novel by Phoebe Gloeckner is an exaggerated coming of age story set against the backdrop of 1970's San Francisco which will strike terror into the hearts of all those who are parents of teenage girls.

Upon meeting fifteen year old Minnie (Bel Powley), her adolescent logic regarding her sexual curiosity and then her first sexual encounter is endearingly comical. The way in which her psych approaches and then questions her new experience is fairly typical of her age and how she questions her appearance and body type in relation to how she believes the opposite sex perceives her is something every female will feel they can relate to how they felt at her age. However her days of innocently thinking about sex come to an end when she begins a heated affair with her mother's (Kristen Wiig) boyfriend, Monroe (Alexander Skarsgard). As their affair continues and becomes more and more intense, Minnie becomes entrenched in a dangerous world which could set her on a destructive path for both herself and her family.

While The Diary of a Teenage Girl has a surprisingly tame moral and it's underlying themes are relatable to any young woman, the film is extremely confrontational as it is largely built around the sexual act and is visually rather graphic. It is frightening to see someone so young (although Bel Powley at time of filming was seven years older than the character she played) involved in these situations and watching as she gradually becomes more and more self destructive in the process. It is a particularly frightening film for anyone who has a daughter as through her voice-recorded diary (a technique that could not be pulled off had it been set in after 2000), her character is humanized as her inner thoughts are fairly typical of a fifteen year old girl and these musings could be that of any girl. Minnie gets confused differentiating between love and sex and see's Monroe's rejection of her as an weight related insult, which is hilarious as it is such a stereotypical conclusion for a teenage girl to make. 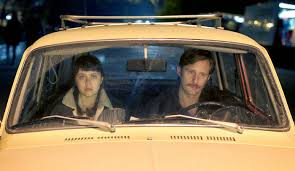 Yet, there are reasons Minnie's curiosity takes a disastrous turn and this along with the "free love" atmosphere of 1970's San Francisco can set parents minds at ease after watching The Diary of A Teenage Girl. Much of Minnie's behaviour is a product of watching and unknowingly imitating her mother's behaviour and also not having a strong and stable male presence in her life. She is seen many times throughout the movie to be watching in the background as her mother enjoys a good time with men, alcohol and various substances. Minnie is also affected by the lack of physical contact from her mother and is therefore craving a feeling of closeness from anyone in any form. As Monroe is the only stable male figure in her life, she is inevitably drawn towards him even though he is less than a appropriate or responsible figure to have in ones life. The extreme turn her normal teenage sexual curiosity takes is a product of her environment rather than a representation of what is expected in an average teenage girl.

The time period in which the film is set brings a certain acceptability to the graphic and open sexual nature of the film. San Francisco was the epicentre of the hippy lifestyle in California during the 1970's and it was a time in which people were learning not to be afraid of sex and to embrace their sexuality. This vibe is felt loud and clear in The Diary of A Teenage Girl and the 70's replicated in wonderful fashion. The artistry and animated graphics featured throughout the film not only support the psychedelic nature of the time period, but also supply a youthful, playful feeling that should be associated with these teenage years.

Bel Powley proves her star power with her powerful and extremely brave performance as Minnie. As previously mentioned, Powley is well out of her adolescent years, but is extremely convincing as her fifteen year old character who she embodies perfectly. She completely nails Minnie's awkward teenage mannerisms and her emotional ups and downs. Kristen Wiig also does very well as Minnie's mother, Charlotte and is a rather empathetic character that the audience feels for.

The Diary of A Teenage Girl has it's heart in the right place and wants to make an example of how one's environment can send them down the wrong path, but it's powerful and confrontational edge do not make it an easy nor enjoyable watch. This is not to say that the film isn't entertaining, but it's graphic representation of a teenage girl in a sexual relationship with an older man and such a young girl becoming so promiscuous result in a tense and uncomfortable film experience.