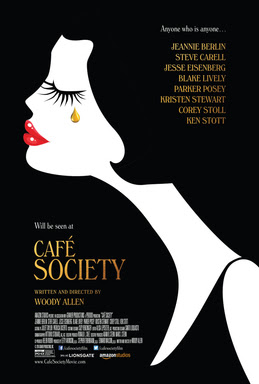 Café Society opens in Australian cinemas on October 20 and is distributed by Entertainment One.

Woody Allen's 1930's tale of two cities, Café Society lacks the lovely nostalgia that it should have with not only it's lukewarm screenplay and lack of strong plot, but also it's strange choices in cinematography that don't make the time period and locations anywhere near as exciting or wondrous as they should be.

In 1935, young and naïve Bronx native, Bobby travels cross-country to try his luck in the glamour town of Hollywood. He is employed by his uncle who is one of Hollywood's leading agents, Phil Stern (Steve Carell) and has one of his uncle's office girls, Vonnie (Kristen Stewart) show him around town. Bobby is instantly besotted with Vonnie, but she is already in a relationship with a mystery man who is already married. However, Bobby and Vonnie's story doesn't end there and spans over time and the two cities of Los Angeles and New York City in one of their most exciting times.

Looking at Café Society from the viewpoint of a fan of the golden age of Hollywood, the film does not hit the heights expected from the exciting prospect of Woody Allen making a period piece about the earlier days of the film town. Allen did such a great job with Midnight in Paris in 2011 with reconstructing Paris in the 1920's complete with personalities such as F. Scott and Zelda Fitzgerald and Ernest Hemingway that one would expect a film set in the 1930's with such a strong film basis to be successful. However, Allen does not do this period justice. Not only are there several historical inaccuracies (including architecture and costume design), but the screenplay features famous names from the time period such as Judy Garland, Errol Flynn and Joan Crawford being thrown around for the sake of it rather than to move the story along. While Café Society is also supposed to be equally focused on the New York City scene, it feels more focused on Hollywood and the New York world which the film's title is named after is left rather unloved. 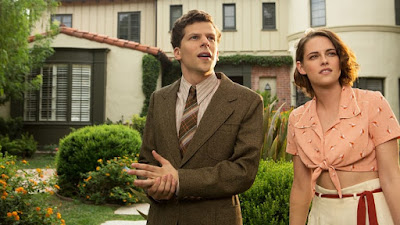 While his films can often leave people trying to figure out what their point is, the usual consensus is that it doesn't matter if there was a greater meaning just as long as you were entertained and enjoyed the film. Café Society has no real direction, a tedious story and we can only have a guess at what Allen was trying to tell us as an audience, but not with any great confidence. It may be that the person we don't want to be is the person we are really longing to be inside, or it could be the idea that circumstances change us and our views on the world. However, it does really feel as though Allen wanted so greatly to make a film about this time period that the story wasn't as important as the visuals.

Yet the visuals are not as striking as they possibly could be. The type of lighting used throughout the film mirrors what the lighting would have been like in such a location, but on screen it can look particularly unattractive at times, especially in Phil Stern's office. The production design for the outdoor locations is really quite lazy. Old Hollywood enthusiasts love seeing old venues recreated for the screen, don't expect this to be the case in Café Society. All the locations appear the same as they would if you visited them in Hollywood yourself today and no effort is made to show locations that once existed and now do not. The Hollywood history film is almost a sub-genre in itself and Café Society is a particularly weak member.

Jesse Eisenberg does fine in the lead role of Bobby and is enjoyable and charismatic. However, it is obvious that Allen has once again directed his leading actor to be a clone of himself. Once upon a time when Woody Allen was playing himself in his own films, it was nowhere near as tiresome as it now is watching a series of films with big name actors giving their best Woody Allen impression. On the other hand, Allen's female characters remain as diverse as ever. Kristen Stewart is luminous as the woman everyone is falling for, Vonnie. Stewart continues to impress with each film she is in and show how versatile an actress she truly is. However, she has little chemistry with Steve Carell. who is her primary love interest of the film.

Café Society is an incredible shame of a movie. Woody Allen could have done so much more with the film by way of screenplay depth and got really inventive and gritty with the time period, but the film feels lazy and uninspired.