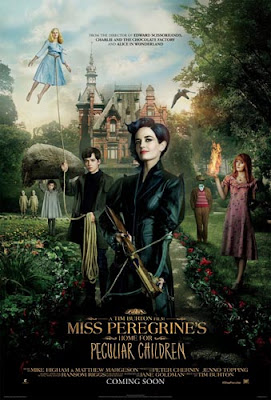 Miss Peregrine's Home for Peculiar Children is now showing in cinemas everywhere and is distributed by 20th Century Fox.

With a title that deceives you into believing that it is just another film based on a piece of young adult fiction inspired by Harry Potter, Miss Peregrine's Home for Peculiar Children is deliciously dark and twisted while at the same time being stunningly atmospheric.

For those who have not read the novel or are yet to see the film, a little about the origins of Ransom Riggs' twisted world. Author Riggs found his inspiration when collecting vintage photographs and he discovered that the most intriguing and bizarre photos he came across were usually those of children. Among these photos included a levitating girl, a boy lifting a rock larger than himself, twin's identically dressed in disturbing clown-like costumes, a department store Santa Claus with white for eyes and a suit that seems as though it is being worn by an invisible boy. Although these are all probably achieved using photography tricks, the unsettling nature of them allowed Riggs' mind to wonder and they each became inspiration for characters in his novel.

Screenwriter Jane Goldman has taken a number a creative liberties which make the Tim Burton directed film different in many ways to the novel and many of these changes will not sit well with fans of the book. Several characters have been omitted from the film and other key scenarios, which would have been beneficial for the film's flow and depth, have been discarded. One could guess that come time for the DVD or Blu-Ray release we may see some of these scenes appear in the special features or as an extended edition, and if so, the editing leaves the screenplay feeling somewhat sluggish and badly edited. However, despite these unfortunate and needless changes, it's intriguing and odd heart remains consistent. 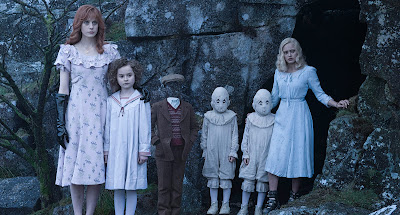 Jake (portrayed by Asa Butterfield) is a seemingly average Floridian teenager who begrudgingly works at his local Smart Aid store, which is where he is when he is one day instructed to leave and check on his slightly mad grandfather (Terence Stamp). He arrives at his house to find his grandfather has been murdered in an incredibly gruesome fashion and briefly lays eyes on the horrific creature that murdered him. Jake is then swept into a world he dismissed as a figment of his grandfather's imagination where there is an orphanage of sorts filled with extraordinary children with uncanny abilities run by the enigmatic Miss Peregrine (Eva Green). As is the case with all things unusual, there are those who live in pursuit of the children...an unimaginable and for most people besides Jake, an unforeseeable horror.

The story of Miss Peregrine's Home for Peculiar Children has found it's kindred spirit in Tim Burton. He is absolutely in his element making this film and his direction is perfection. Although it does not reach the heights of his acknowledged best films, it is a story that was just screaming for him to place his stamp on it. Despite the screenplay not being as strong as it should have been, Burton does wonders with everything he can control with his superb direction and gives the film the dark and twisted, but beautiful edge it deserves.

Miss Peregrine's Home for Peculiar Children has a slightly X-Men-ish motto behind it that declares different as being a blessing rather than a burden, but it doesn't shout this loud and clear. The film focuses more on the power of narrative and just like Abe's stories to a young Jake, it allows a swift suspension of disbelief as you become engrossed in this fantasy world. It is extremely atmospheric at all times with the sterile Smart Aid, the worn down feel of Jake's Florida hometown, the tiny Welsh fishing village and, of course, Miss Peregrine's home. The second half of the film is a great deal darker than the first, but still maintains a colourful façade which is particularly Burton-esque. The production design by Gavin Bocquet is sublime and the costume design by the ever impressive Colleen Atwood for the children of the 1940's is wonderful. 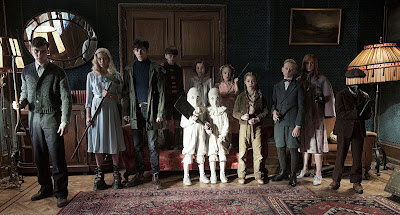 In a role that could well have been exaggerated and overplayed, Eva Green is absolutely superb as Miss Peregrine. She performs the role with complete dignity and poise and manages to maintain the balance of harsh, but maternal. Her scene with Victor is particularly touching. Asa Butterfield is perfectly cast as Jake with his scenes involving Terence Stamp incredibly moving and sweet as they highlight the strong bond between grandparent and grandchil. Ella Purnell as Emma is also a stand out, who's role is a great deal more physical than the others. Although her peculiarity is flying, the hard part of her role is when she is walking and wearing heavy shoes to keep her on the ground, which she is continuously convincing of by way of her gait throughout the film. Samuel L. Jackson is also at his most terrifying as the evil Barron.

Miss Peregrine's Home for Peculiar Children is a return to form for Tim Burton with a story that seemas as though it was made for him to put to screen. It exists in an incredibly colourful imaginative and intriguing world, which is twisted and unsettling in a welcomed way.