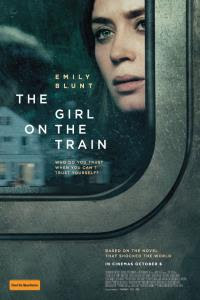 The Girl on the Train is now showing in cinemas everywhere and is distributed by Entertainment One in Australia.

One has to feel sorry for The Girl on the Train.

When the novel by Paula Hawkins was released in early 2015, it instantly drew comparisons to Gillian Flynn's "Gone Girl" with it's similar themes and suspenseful nature. It was only ineviatble that the film directed by Tate Taylor would also be compared to the film version of Gone Girl, which was directed by David Fincher. While this comparison is harsh to have to contend with, The Girl on the Train also faces the comparison that could never have been avoided which is the eternal question of whether the movie is as good as the book.

It feels as though The Girl on the Train was never destined to be it's own film as the filmmakers obviously knew the pressures they were going to be unable to avoid. As a result, it evidently struggles with it's own identity and caves under the pressure in several areas, but excels itself in others.

The girl on the train is Rachel (Emily Blunt), a woman who has turned to alcoholism after several bad turns in her life including having her husband, Tom (Justin Theroux) leave her for another woman, Anna (Rebecca Ferguson) whom he is now married to with a small child. Rachel travels by her old house each day and see's an idyllic couple a few doors up who she likes to believe are living the life she misses so greatly. However, one day she witnesses something in this perfect house that makes her fall apart and plummet into an alcohol-induced black spot which she can only remember fragments of. It is only when she hears that Megan Hipwell (Haley Bennett) has disappeared that she starts to become paranoid that she is the one behind her disappearance. 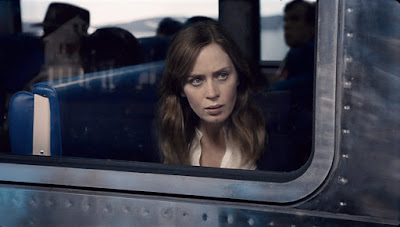 Although there are several notable differences from the book that impact the film's depth, The Girl on the Train carries with it the same atmosphere and suspense which made the novel so popular. The story is in itself unsettling with characters that are intriguing, but are all quite unlikable. All the people in the film (except Lisa Kudrow's Monica who was invented for the film) are extremely flawed human beings to the point that they all feel dirty to watch. Emily Blunt's Rachel is one that is particularly hard to watch, just as she was to read in the book. This is a woman in so deep that she cannot pull herself, only dig herself in deeper. Of course, this terrible character trait is what moves the story along and is ultimately justified despite being so frustrating. A film does not need to have likable characters in order to work and although all the cast give splendid performances, there is no connection between the viewer and the characters because one does not want to feel connected to people like this.

However, unless you have read the book, Taylor's film does carry a real sense of suspense and unpredictability that make it impossible to look away. The reason The Girl on the Train is so often compared to Gone Girl is because they both have the resounding theme of how well do we really know the ones closest to us. Paula Hawkins book delves into this in greater detail than the film. As the book was written in the first person by all three of the main female characters in rotating order, the film struggles to adapt to this and fit it into it's nearly two hour running time. Rebecca Ferguson's Anna is particularly hard done by as her character is sliced of all her gritty inner thoughts and true character development. 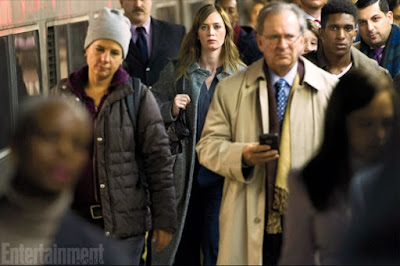 One of the resounding questions posed by anyone who had read the book beforehand is how Emily Blunt could have possibly been cast as Rachel? In the novel, Rachel is referred to numerous times as being unattractive, overweight and repulsive..... a description that does not suit the genetically blessed Blunt. The make-up department certainly tries their hardest to make her less attractive, but the way Blunt disappears into her role makes one forget about her outward appearance. Her performance is of the incredibly unstable Rachel is just superb and shows a great deal of variety within her screen time. The bathroom mirror scene is particularly memorable for how terrifying she suddenly becomes.

Haley Bennet is also wonderful as Megan. Her character and performance seem one-dimensional for the majority of the film until towards the end when she has the opportunity to show how much talent she truly has and rises to the occasion. Rebecca Ferguson does what she can with her role, but again, she is denied the depth Rachel and Megan are given. Luke Evans shines as the grieving husband, Scott and it is unfortunate he didn't have more screen time. Justin Theroux does fine as Tom, but his is the only performance in the film that feels a little too restrained, particularly as it heads into the final quarter.

The Girl on the Train cannot help but be compared to the novel in which it is based on by those who had read it, which in this case is not a good thing. The film has a dark and grimy atmosphere with a screenplay that evidently struggles to be all it wants to be. Yet, the cast (particularly Emily Blunt and Haley Bennett) breath life into the film and save it from being merely a failed adaptation.