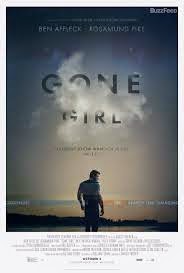 Gone Girl is now showing in cinemas everywhere and is distributed in Australia by Twentieth Century Fox.

A book shouldn't be made into a film unless it really has something to gain from it. Unfortunately in most cases with highly successful books, this gain and the driving reason behind the adaptation seems to be money. However, Gone Girl truly has gained from being made into a movie, especially in the hands of David Fincher. Based on the bestselling novel by Gillian Flynn (who also wrote the screenplay), the neo-noir film unsettles and thrills with its combination of suspense and depth. With incredibly strong and memorable performances by all the cast, Gone Girl proves that unlike so many others, it belongs off the book page and on the screen.

On the morning of their anniversary, Nick Dunne (Ben Affleck) returns home to find that his wife of five years, Amy (Rosamund Pike) has disappeared in what appears to be a violent kidnapping. As the search for Amy begins, Nick finds himself at the centre of the investigation as all the evidence starts to point to him when the cracks in his marriage start to be seen by the world and he becomes the lead suspect in his wife's disappearance and assumed murder.

Fincher's Gone Girl does exactly what book to film adaptations should do and that is to recognise and act upon what cinema can do to enhance the story. As a book, "Gone Girl" continues to attract a large readership and among it are admirers and cynics of Flynn's work. However, the film will impress and entertain even those amongst the cynics. The screenplay stays true to the book for the most part which means that the ending, which is the main cause for complaint of many, is present in the film. This is evidently what many will profess to dislike about the film, but the way in which Fincher has dealt with and fleshed out the material which has been given to him is testimony to his brilliance as a film maker. It is not often one says that a book works better on screen than it does on paper, but the unmistakable style of Fincher is perfect for Flynn's story and brings out it's true suspenseful and unsettling nature in spectacular style.

For those who have not read the book, Gone Girl is completely unpredictable and suspenseful. Yet, those who have read the book will be astonished at the suspense they feel while watching and knowing what is to come. While most of the suspense is in the story, it is assisted in spectacular fashion by the incredibly haunting music provided by Trent Reznor and Atticus Ross and gorgeous use of cinematography. Fincher shows the characters from such interesting and beautiful camera angles which allow a different story to be told through the camera lens. The final music piece of the film which plays through the last scene and into the credits is beautifully unsettling and this is the feeling that resonates after leaving the film. 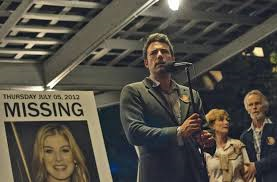 Fincher has the wonderful ability to bring out themes in the film which were not as evident in the book as what they should have been. The notion which both the book and the film will prompt people into contemplating is whether we ever truly know the person we are with. It is easy to start seeing your marriage alongside Nick and Amy's and hoping that in the comparison you see differences. While this is intriguingly and thought provoking, the theme which plays alongside this in the film is that of changing ourselves for other people. This is something which many members of the audience will be able to relate to as we are all capable of trying to change ourselves for others. However, you can only try and be someone else for a certain amount of time until you become troubled as that unknown version of yourself and the real person starts to show themselves. In marriage, people don't change after they are married. They purely relax and reveal who they really are.

From the very first moment Rosamund Pike appears on screen as Amy Dunne in close up, she presents the viewer with a character of extreme complexity. As a result of the constant comparison Amy has felt throughout her life to her mother's fictional book character, Amazing Amy, she is never quite sure of who she is. Pike's performance is nothing short of outstanding. She shows a remarkable amount of versatility and range in this complex and intriguing role and is perfectly cast in the role. Pike and Ben Affleck have such an interesting screen chemistry. They do fine in the romantic scenes, but it is the awkwardness and tension they have towards each other afterwards which makes them truly exciting to watch. Affleck does very well as Nick Dunne and again is perfect for the role. He gives a pure, strong and controlled performance. Both Affleck and Pike also have the uncanny ability to make the viewer feel both love and hate for the two of them at different times throughout the film and hold a real emotional connection with the audience.
Carrie Coon, who plays Nick's twin sister, Margo is a stand out. She is often Nick's strength and she is completely entertaining in every scene she is in. Neil Patrick Harris plays Amy's ex-boyfriend, Desi Collings, a role which seems completely different from his previous work. Desi is another very interesting character, as you never know what his real intentions are and Harris gives such a strong and memorable performance in a part which is relatively small. Kim Dickens is also commendable in her role as Detective Rhonda Boney. It is a role which could have been stereotypical and one dimensional, but Dickens is perfect and incredibly real.

Gone Girl worked as a book for so many, but the film fleshes out far more and brings to the screen the type of thriller once thought long gone. David Fincher's film shows that there are still ways to shock audiences which are accompanied by dark beauty and extraordinary talent. While the film doesn't end in popular fashion, it unsettles and resonates for long after.