Dracula Untold will open in Australian cinemas on the 2nd of October 2014 and is distributed by Universal Pictures. Opening in the United Kingdom also on the 3rd of October and the United States on the 10th.

As a new retelling of Bram Stoker's famous creature of the undead, Dracula Untold is an atmospheric and entertaining hybrid of the historical picture and supernatural fantasy. However, unlike other films based on Dracula, it is not as much a horror film as a historical drama with moments of pure human emotion and captivating images from the Transylvanian dark ages. As an origins film, there is the guaranteed ending, but the screenplay by Matt Sazama and Burk Sharpless gives greater depth to the story which offers welcomed suspense and surprise to this untold story of Dracula.

Although Prince of Transylvania, Vlad Tepes (Luke Evans) has achieved long awaited peace for his country, the threat from the Turks and their leader, Mehmed (Dominic Cooper) is never far away. When Mehmed demands soldiers from Vlad's kingdom for his army, Vlad seeks the help of a supernatural evil in the mountains (Charles Dance) in order to protect his kingdom and save lives. This creature of the dark strikes a sinister deal with Vlad in which he will hold the same powers as he for a number of days in order to save his kingdom, but must not lose his self control or he will become what he is forever. However, Vlad will whatever he needs to do to save his people and protect his wife, Mirena (Sarah Gadon) and son, Ingeras (Art Parkinson).

Dracula is a phenomenon which society will never grow tired of. Gary Shore's retelling of the origins of the mythical creature is an original cinematic experience for the character in this snapshot of a small period in time in which Vlad the Impaler became his alter ego. Whilst the subject is one which the audience is well aware its outcome, there is still a degree of unpredictability in its story which is a welcomed surprise, though it's ending does tend to stroll into the not so unfamiliar territory of cliché. Dracula Untold aims to be as much of an epic motion picture event as it possibly can in a running time of 93 minutes, but evidently tries a little too hard too impress in particular battle scenes which make it seem a little more comical than intended. 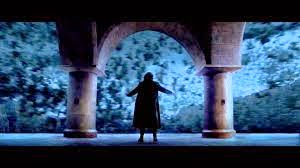 Visually, Dracula Untold very much resembles a cross between The Lord of The Rings/ The Hobbit and Game of Thrones, but this is not something which will generally be acknowledged as a negative aspect of the film. For many this similarity will lie with the presence of actors from both of these franchises, but it is more the medieval battles scenes and royal thrones which will prompt this comparison. However, the film is wonderfully atmospheric and the time period is captured in it's intriguing atmosphere of beauty and dread. As a whole Dracula Untold is not surprisingly a dark film in mood and visuals. There are some exquisite landscape shots and incredible production design and art direction. The battle scenes are quite spectacular, if not a little over-exaggerated and shot in an erratic fashion.

Luke Evans is perfect for this role which shows a different side to Vlad/Dracula than is traditionally seen, which is that of a father, husband and leader as well as a monster. He is extremely enigmatic and believable as the man who has a dark side that he insists on hiding from those who love him. Evans has wonderful on screen chemistry with Sarah Gadon and Art Parkinson, who both are also very good and bring an emotional edge to the film. Gadon is right on cue with her show of passion for her husband and maternal instinct for her child, while Parkinson is a real stand out and performs with emotion beyond his years.

As a film which relies more on the historical side of the beginnings of Dracula rather than on the not uncommon horror aspect of his story, Dracula Untold opens this story up to a greater audience. The film is an original spin on a character who has been seen in film and television countless times over the years and allows cinema audiences to find out who was the man before the monster.