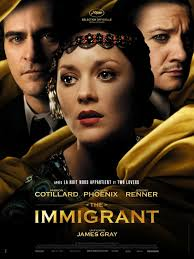 The Immigrant opens in limited release in Australia on the 25th of September 2014 and is distributed by Roadshow Films.

James Gray's The Immigrant is a truly exquisite piece of work. Visually stunning and reminiscent of 1920's New York City, the tale of a woman's journey to a new and promising land which turns to disaster is extraordinarily tight knit and flows wonderfully without being clichéd or predictable. Marion Cotillard and Joaquin Phoenix are both superb as two strong characters with a great deal of complexity and depth. The Immigrant is as stunning on the surface as it is subtly complex.

Polish immigrant, Ewa Cybulska (Marion Cotillard) and her sister, Magda (Angela Sarafyan) arrive on Ellis Island, New York City in 1921 in order to escape the horrors of their war torn homeland and make a new start in the land of opportunity. When Magda is denied entry to the United States on account of her bad health, Ewa is nearly deported herself when nobody arrives to meet her and she is accused of participating in immoral activities aboard the boat. Her luck seemingly changes when she meets Bruno Weiss (Joaquin Phoenix) who takes her to the mainland and gives her a place to sleep and a position at his theatre. However, under the influence of Bruno, Ewa finds herself thrown into the world of prostitution against her all her morals. Her only escape may lie with the enigmatic Orlando the Magician (Jeremy Renner), whom already has a long standing feud with his cousin, Bruno.

From the film's beautiful opening of nostalgic images of 1920's Ellis Island and New York City, The Immigrant is an extremely respectable piece of work with outstanding performances that carry the complexity of the situation, characters and relationships. Not only is James Gray's direction incredibly special, but the screenplay which he has co-written with Ric Menello is superb.  The story is intriguing, unpredictable and even if a little slow paced, never tedious. Elements of The Immigrant are still relatable today for many who leave their homeland in search of a better life. They escape horrors, but arrive in a new land as a stranger with no clear pathway to their new life with the opportunities they know are available. Many arrive jobless and although the majority wouldn't be in Ewa's situation, many have to start with nothing to eventually find happiness and success. 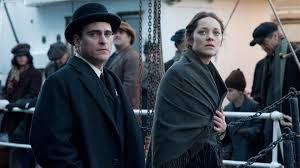 1920's New York is recreated with a startling degree of realism. The Immigrant's production design is truly remarkable, particularly of Ellis Island and the streets of New York City where the visuals are able to provoke other senses as well as sight and sound. The way the camera captures the Statue of Liberty on the harbour is inspiring and a constant reminder of the freedom and opportunity the immigrants arriving at Ellis Island have come to America for. There are some spectacular pieces of cinematography throughout the film, including during Ewa's confessional scene and the unforgettable final shot. The nostalgic nature of the film is also captured in the beautiful costume design and mesmerising musical score.

Marion Cotillard and Joaquin Phoenix give exceptionally strong performances of highly complex characters which are anything but one-dimensional. Cotillard's Ewa is a woman who treads the line between fragile and strong in a way which some may find a troubling character trait. However, a woman in her position would indeed be neither be one nor the other. Ewa is fragile and weak as she is a stranger in a new land with no one to help her get a proper job and a sorry reputation that she cannot get rid of, but she has to be strong as she knows she is her sister's only hope. When she is in the presence of money, Ewa is her stronger self as her strength feeds off the memory of her sister. Her ordeal cuts down her optimism, but her strength as the big sister she is remains. As Ewa, Cotillard demonstrates the double side to her personality with complete sincerity. She gives a beautiful performance in which she forms an emotional attachment and captures the audiences complete sympathy.

Joaquin Phoenix's Bruno Weiss is on the surface the villain of the film, but is he truly a villain? It is true that the things he makes Ewa do for his own profit are despicable, but he truly cares for his working girls and in his heart believes he is doing them all a favour by finding them work and not allowing them to succumb to poverty. There will always be the debate of whether the activities he makes them do are ethical and it is not an untruth to say that Bruno is also concerned with his finances. However, all the girls are thankful to him and idolise him for what he has done for them, besides Ewa and even then, while Ewa does not show any compassion or warmth towards Bruno, he does not repay her with the same spite and maintains that he cares very much for her. Underneath his domineering physical presence, Bruno may well be just a lonely soul looking for love and appreciation and finding this in his girls by feeling like he is doing something to change their lives for the better. Phoenix does a brilliant job at portraying this complex and layered character. As Bruno, Phoenix has an incredible presence about him and is extremely intimidating, yet incredibly charismatic.

While Jeremy Renner's Orlando/ Emil doesn't have as much screen time as Ewa or Bruno, he creates a memorable impression with the time he does have. The character of Emil is extremely likable and charismatic, which makes it clear to see why Bruno is jealous of him and Ewa falls for him. The chemistry between Renner and Cotillard is wonderfully romantic and provides hope in a dark world.

The Immigrant is a truly remarkable period piece not only for it's stunning visuals and nostalgic atmosphere, but also for the depth of it's story and main characters. The incredible final shot leaves one with the memory of two of the best constructed characters and the memory of a truly exquisite piece of film.