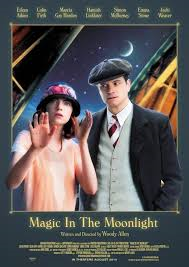 Magic in the Moonlight has all the cinematic elements one would expect to find in a Woody Allen film, yet the magic promised in the title is not quite present. Allen's latest does give out sparks with it's beautiful panoramic shots, exquisite costume design and entertaining and witty performance by Colin Firth, yet as a whole remains rather unremarkable and forgettable. It's a screenplay filled with the promise of a comical and joyful scenario, but falls into the unfortunate trap of coming across as ridiculous rather than charming.

Stanley Crawford (Colin Firth), an Englishman who's alter ego is the Chinese magician, Wei Ling Soo, makes it his duty and takes great pleasure in exposing frauds who claim to be psychic mediums. Following a tip from his long time friend, Howard Burkan (Simon McBurney), Stanley travels to the Cote d'Azur where a young woman who claims to be a medium is staying with the wealthy Catledge family. When Stanley meets the woman in question, Sophie (Emma Stone), he finds it hard to put a finger on her methods and starts to wonder whether there is really more to this life than what he has always believed.

With it's interesting and seemingly original subject matter, Magic in the Moonlight very much feels like it is Woody Allen's exploration of the Science vs. Spirituality debate. It is unfortunately not a thoroughly executed theme as it is strong to a point, and then starts to lose it's importance drastically towards the end of the film. The lead character of Stanley Crawford makes it clear that he believes everything has an explanation and that there is nothing more to this world than what we see. However, when he meets Sophie and cannot understand her ways, he starts to believe that his beliefs may not have been valid. As the film progresses, there is a great deal of going and back and forwards before the film arrives at an ending which doesn't say anything clear about the point Allen is trying to make. Has Allen just constructed a story around this theme so that his audience can make their own conclusion, or is there a point he is trying to make there which is just unclear? 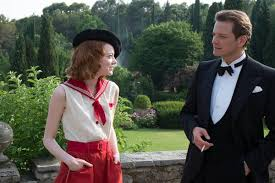 However, without looking into Magic in the Moonlight with too much depth, it is an entertaining and fun piece of work. The dialogue is particularly Allen-esque and wonderfully executed with some very funny moments, particularly by Colin Firth. However, the ending does go off on a tangent to make the finale seem highly unrealistic and quite ridiculous. One might believe that this was an attempt to have an old fashioned, romantic ending to a nostalgic film, but is more mindboggling than anything else. Overall the film is pleasantly nostalgic and visually a treat. Magic in the Moonlight is set in 1928 and the way in which it recreates this time period in the south of France is perfect. The production design is well reminiscent of the 1920's and the costume design is absolutely stunning. The "hot" music that is played when dancing is also perfectly suited to the time period and very fun. The Cote d'Azur is beautifully captured on film with gorgeous panoramic shots of the seaside and mountains.

Colin Firth is the absolute standout of the cast. He has exceptional comedic timing and delivers his witty and sarcastic dialogue so naturally which makes him an absolute joy to watch. Emma Stone does well in her role as Sophie individually, but together Firth and Stone have very little on screen chemistry. Not only do they not visually fit together, but there are no sparks between the two at all and this makes it very hard to believe that one could feel anything romantically for the other.

Magic in the Moonlight is a beautiful nostalgic trip, but it's fun story is not a strongly executed one. Unfortunately, Woody Allen's latest film is one of his more forgettable ones.