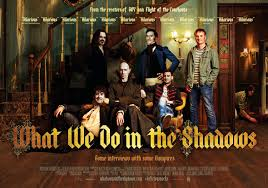 What We Do In The Shadows may well be the most universally hilarious film of the year. It's extremely clever situational humour is the backbone of this unique and entertaining look at vampire life in the modern world as told in documentary style with a hint of narrative. Written by directors and cast members, Jemaine Clement and Taika Waititi, What We Do In The Shadows is wonderfully character driven and a tremendous amount of fun for even those who are the biggest vampire cynics.

In 2013, a camera crew was given special permission and protection to enter into the house of a group of vampires living in Wellington, New Zealand to capture their nocturnal lives on film. Viago (Taika Waititi), Vladislav ( Jemaine Clement), Deacon (Jonathan Brugh) and Petyr (Ben Fransham) are four flatmates who are all very much their own vampire and have extremely different personalities. Their undead existence is not easy in the 21st century and they have to adapt as well as they can to living in the modern world. Their lives are made all the more complicated when Petyr turns twenty-something, Nick (Cori Gonzalez-Macuer) into a vampire and he brings his human friend, Stuart (Stuart Rutherford) into the house. It takes Nick and Stuart to show in this portrait of vampire life that while they are undead creatures of the night, they are not immune to feeling and emotion.

What We Do In The Shadows is exceptionally clever and hilarious on so many levels. While the vampire genre has been used excessively in film over the past decade, this mockumentary takes the traditional elements of these supernatural creatures and presents them in an original and humorous way. Many of the issues addressed when watching these vampires explore life in Wellington in the present and trying to blend in are quite valid concerns (one could imagine) and the way they are executed makes them extremely entertaining. For example, for vampires to go out at night they must be invited into nightclubs, how they get ready dressed without a reflection to check how they look and in order to obtain modern clothes, they must take clothes off their victims (as not many shops are open in their waking hours). There is also the eternal battle between vampires and werewolves. The werewolves have 21st century problems of their own and the rivalry between the two species is more verbal than physical. What We Do In The Shadows is an extremely unique take on vampires living in the modern world and the humour is brilliantly incorporated into the situations which they find themselves in. As the humour employed in the screenplay is mostly situational humour and the dialogue extremely witty, the film is universally funny as it appeals to a greater audience and discriminates against none. 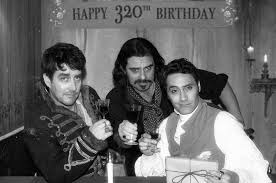 While What We Do In The Shadows will stay with people long after their first watch mainly for it's humour, there is no denying that it is very atmospheric and has it's own individual personality. Horror elements are carefully worked into the film and incorporated with life in Wellington in the present in a subtle yet effective way. The production design for the vampire's house is reminiscent of the old fashioned manors in classic horror films and is fitting for a group such as this to dwell in. Yet, once the characters step outside into the night, the film takes on a whole new feel as they prowl the streets of Wellington. The traditional meets a place which is not associated with the vampire sub-genre and it feels like a city anyone would stroll in which gives the film a familiar feeling for the viewer. As the film's title suggests, shadows are used to create the dark and mysterious atmosphere with the aid of the score which is also reminiscent of earlier horror films. The costume design and make-up for the main characters (especially Petyr) is also very well done.

The characters of Viago, Vladislav and Deacon are what really make What We Do In The Shadows such a hilarious piece of work. Each character is distinctive, brilliantly portrayed and have a wonderful amount of chemistry with each other. Taika Waititi's Viago is often awkward for the documentary crew, but incredibly endearing, while Jemaine Clement's Vladislav is the vampire from the legends of a time long ago we often hear and is an interesting and layered character. Both Waititi and Clement do an incredible job at directing themselves and deliver believable and entertaining characters. Jonathan Brugh is also hilarious as Deacon, who is the "bad boy" of the group with an incredibly entertaining attitude.

What We Do In The Shadows is a delight and a half. It certainly is one of the funniest, if not the funniest film of the year and extremely clever and terribly unique.