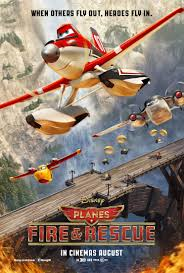 Planes: Fire and Rescue is a remarkable improvement on it's 2013 predecessor, Planes. Even though it does not have the makings of a Disney classic, it definitely works as a holiday film that is fun and entertaining with frequent laughs for adults as well as children. The film takes the method of personification of it's non-human characters as used in the 2006 Disney Pixar film, Cars further than in it's original and this difference allows for greater enjoyment and the greater appreciation of the characters.

Cropduster turned champion air-racer, Dusty Crophopper (voiced by Dane Cook), is flying high after his Wing Across the World win and enjoying his new found fame and respect. His world crumbles around him when he realises that he has an unfixable mechanical problem with his engine which will stop him from ever racing again. He decides that he will instead train to be a fire and rescue plane and joins forces with a group known as the Smokejumpers. Dusty and his new found friends face danger in the battle against an out of control wild fire and Dusty finds himself having to step up and adapt to his new challenge with extreme haste.

When the original Planes film was created, it was intended to be a direct to DVD release and was saved from being so after the response from test audiences was so positive. The differences between that film and Planes: Fire and Rescue are so dramatic for the reason that the latter was made especially for the big screen and therefore was in possession of a bigger budget and higher expectations. The sequel to the 2013 Cars spin-off has a finer screenplay, more impressive use of animation and a popular soundtrack, which are all the product of a film with greater expectations than it's predecessor. The story may not be a terribly exciting, unpredictable or original one and slightly bland, but also could be quite scary in part for small children. However, what the Planes: Fire and Rescue screenplay has which the first film lacked is the fun personification of it's aviation based characters. It is a great deal more like Cars in the way that the planes take on greater human characteristics and situations, which is a feature adults will find highly amusing. For example, the bar scene in the film features planes becoming the stereotypical characters one may find in a bar and the situations that pan out between these types. This technique adds many a laugh to the film and an enjoyable element that was missing from the first film. 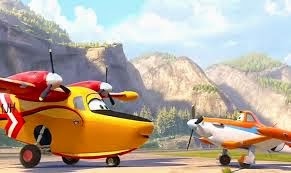 While the principle animation is the same as in Planes, it's use is far more impressive with amazingly lifelike images of the wildfire tearing through the woodlands and of the waterfall and river rapids. The use of colour is incredibly impressive and the film as a whole is visually beautiful and interesting to watch. Disney and Disney Resort fanatics may recognise that the lodge in the film bears a startling resemblance to the magnificent lobby at Disney's Grand Californian Hotel and Spa in Anaheim. It's a terribly clever piece of marketing that makes all those who have been to Disneyland in California feel reminiscent and encourages them to return. There are also several other pieces of film cross overs between the Cars and Planes worlds snuck in throughout the film. The soundtrack to the film is also fitting, particularly the use of AC/DC's "Thunderstruck".

The voice performances by the cast in Planes: Fire and Rescue are all fine, but there are no real stand outs among the performers. Dane Cook once again returns to loan his voice to Dusty and again does well with making the role his own. Julie Bowen, who lends her vocal talents to Dusty's fan, Lil' Dipper also does well and brings fun with a touch of crazy to the character.

Planes: Fire and Rescue steps up to the sequel challenge and the result is a film which is redeeming as well as being entertaining and enjoyable.