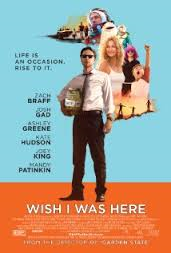 Zach Braff's long awaited Wish I Was Here is as charming and feel good as they come. While for some this may mean an overkill of sentimentality and optimism, this film may be just what is needed to break the mould of misery felt in the world. With Wish I Was Here, Braff gives a piece of happiness and fun to his audience that resonates and shows once again his great talent in bringing out the beauty in everything and everyone with his direction.

Los Angeles struggling actor, Aidan Bloom (Braff) has always been able to pursue his dream with the ongoing support of his working wife, Sarah (Kate Hudson) and two children, Grace (Joey King) and Tucker (Pierce Gagnon). However, when his father, Gabe (Mandy Patinkin) gives him the news that his health is rapidly deteriorating and he can no longer pay for Grace and Tucker's school fees, Aidan is faced with the reality that his dream may be over and it may be the time to move on. He realises that everyone around him is searching for happiness, but that everyone needs a little help from each other to find that place.

Wish I Was Here may come under fire for being too much of a light, feel good film, but this isn't so much of a negative. Zach Braff's personal style which has previously been seen in his 2004 film, Garden State and through his acting and direction in several episodes of the television series, "Scrubs", is very much apparent in his new film. This is a style that many find endearing and hilarious, while others find ridiculous and irritating. So it goes without saying that Wish I Was Here will fare better for those who admire Braff, but one cannot help but appreciate what he has attempted to do with this film whether they are a fan of his or not. 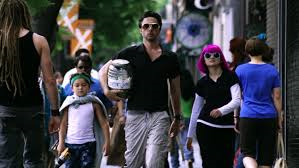 While Wish I Was Here's initial claim to fame was being Braff's crowd-funding project and therefore has instant importance for the contributors, what it attempts to do for both it's contributing and non-contributing audiences is just as important. The film is incredibly uplifting as well as moving and sincere. It is the rare type of film these days that's optimism resonates with the viewer and still gives you a reason to smile days later. Wish I Was Here truly basks in the glory of how special life is and how we must make the most of every moment, which makes it a film that is needed when the world and cinema screens tend to show a great deal of gloom. There are moments in the screenplay and in Braff's direction which are slightly over-sentimental, but the film is overall such a pleasant experience.

The brand of humour employed in Wish I Was Here is more reminiscent of Braff's "Scrubs" days (particularly in the first scene) than the quirky Garden State and there are some very funny moments throughout the film. The dialogue is very clever and there are many life quotes sewn in among the conversations between the characters. As well as having an uplifting story, the visuals add towards the happy vibe of the film with an extraordinary use of colour and spectacular locations. Braff knows how to find and bring out the beauty in everyday situations and surroundings and remind the viewer that they must look for that beauty next time they are in such a place. The soundtrack is original and perfectly suited to the overall atmosphere of the film as with it's folk edge, it is serene, thoughtful and enjoyable.

On screen, Zach Braff is right at home in his character of Aidan Bloom and shows how he has grown and changed as an actor. He directs himself wonderfully and his comedic timing is, as always, brilliant. He and Kate Hudson have an incredible amount of on screen chemistry and work extremely well together. The two represent a relationship which is not perfect, but strong as they are best friends who haven't lost their passion for conversation over the years. This is absolutely Hudson's best performance in years. Her performance is controlled and strong, and her Sarah such a great role model. She is the bread winner for her family as she wants to see her husband succeed, but that doesn't mean she misses out on anything with her family.

Joey King is an absolute star and once again proves that she has an incredible career ahead of her. Her performance of the confused and frustrated teenager is a heartfelt and realistic one, yet she is also such a fun character with her bright purple wig that she opts to wear. Both Mandy Patinkin and Josh Gad are also stand outs as they are both incredibly moving in their roles.

Wish I Was Here is a sweet, fun and original experience. It seeks to remind us how special life and happiness are and what makes that all the more special is that this film provides such happiness.