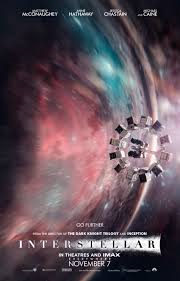 Interstellar opens in Australian cinemas on 6 November and is distributed by Roadshow Films. Opening in the United States and United Kingdom on 7 November.

Christopher Nolan's highly anticipated Interstellar is an incredible thought-provoking, visual event that simultaneously examines the scientific complexity of time relativity in space travel and the emotional depth and strength held by those directly impacted. The film is a visual masterpiece with incredible sound editing and score that support a highly intelligent screenplay that is particularly Nolan-esque. The impressive cast led by Matthew McConaughey give Interstellar the emotional backbone which allows this film to project itself into a class above other sci-fi and futuristic films.

In the future, the human race has come full circle and once again places its importance on what the land can give us rather than on technological advances, but even the land is turning on the human race. It's a world that doesn't sit well with father of two, Cooper (Matthew McConaughey), who wants to be out exploring the world and it's skies. His chance comes when he and his daughter, Murphy (Mackenzie Foy) stumble upon NASA's secret headquarters and learn that they have discovered a wormhole near Saturn that leads to another galaxy where there could be another planet suitable for human life. Leaving behind a distraught and angry Murphy, Cooper sets out on the Endurance to search this galaxy for a new home for the human race while fighting against time and the dangers that space and these new worlds present.

Although Interstellar is reminiscent of Stanley Kubrick's 2001: A Space Odyssey and last year's Gravity for the obvious reasons, it is unique for what it brings to the group which the two mentioned films belong to. It is certainly a complex scientific film which must be applauded for it's intelligence and the originality of the journey which it's characters embark on. The real enemy of the film is time as the time in space and in distant galaxies can differ greatly from time on Earth. It is an intriguing concept, but also a very frightening one when it is realised how much is missed on Earth after so little time has passed in space.

This is where the emotional core of the film comes from. The characters come to realise that love transcends time and they all fight against time for those they love. While Interstellar is thought-provoking on a scientific level, it is also so on this emotional level. The idea of leaving ones family without the knowledge of whether or not they will return and not knowing whether they will be able to contact them is both unsettling and disturbing as it connects with the audience on such a personal level. It also prompts the audience into wondering what they would do in Cooper's situation. If you had the chance to find a way to save your family but there was no guarantee of ever seeing or hearing from them again, would you do it? When the question is asked, the answer would most probably be yes, but in Interstellar we see how much agony it would be to feel the separation.

At nearly three hours long, Interstellar does well to maintain tension and remain intriguing for this amount of time, yet at times the length is felt. Nolan has really attempted to pack as much action, emotion and information into the film as he possibly can and while this is admirable, there is still the feeling that things are missing as a result of other things being included. At such a running time, it is obvious that Nolan could not include any more in than he already had so there are some holes in the story as a result and hard facts are missing as to how and why things are this way on Earth. There are tinges of disbelief throughout the film and the notion that things may be getting a little too far-fetched, but Interstellar is not a prediction of what is to become of the human race as much as it is a piece of entertainment about the future of the human race.

Interstellar is just brilliant in it's production. Christopher Nolan shot the film using 15/70mm IMAX cameras so it is intended to be watched on such a screen and this is definitely how one will get the most out of the film. Like the film itself, many of the frames are quite complex in an interesting and positive way as there is so much to take in. While there are some glorious landscape shots, it is the CGI employed for the scenes in space which are truly memorable and exquisite. It is a gentle reminder of how beautiful the galaxy is while dangerous. The score by Hans Zimmer is also perfection and adds to the suspense of the film brilliantly. However, some may find the film a little overpowering in it's volume and high speed and erratic camera movements in it's action sequences.

Matthew McConaughey is truly wonderful as Cooper and has an incredible presence on screen. The audience takes to his character in a way which they feel a real emotional connection to him and they care a great deal about what happens to Cooper during the film. While he is a tower of strength for the majority of the film, it is in the moments which the character is at his most vulnerable that are the strongest for McConaughey. It is truly devastating and haunting watching Cooper leave his children and then receiving messages from them while on aboard.

Anne Hathaway does very well as Amelia Brand and her character continually grows on the audience throughout the film. Jessica Chastain is also very good as the adult Murphy, yet Mackenzie Foy who plays the younger version of her character gives an extremely powerful performance for such a young age. Foy and McConaughey work incredibly well as the father and daughter team and one feels the tragedy on a personal level of these two being separated.

Interstellar is a cinematic event that encourages it's audience to use their heart and mind when watching. Although not perfect on every level, it is memorable for the things it does to perfection.