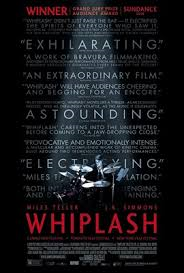 Whiplash opens in Australian cinemas on October 23 and is distributed by Sony Pictures. Now showing in limited release in the USA and opening January 16 in the United Kingdom.

Damien Chazelle's Whiplash absolutely triumphs over everything that is cliché and stereotypical of a music school film. As an intensely real film set inside an extremely high pressure institution, this character driven drama does not sugar-coat any of it's content which gives it an unpredictability and suspense not often felt in a film such as this. Miles Teller and J.K. Simmons give absolutely outstanding performances as two very real and very complex characters who have incredible on-screen chemistry and are involved together in some of the most intense and memorable scenes of the year.

When we are introduced to nineteen-year-old drummer, Andrew (Miles Teller), his private practise session at his music school has been interrupted by infamous teacher/conductor, Terence Fletcher (J.K. Simmons) who insists on listening to him play. Although Fletcher doesn't give Andrew any indication that he is impressed, he transfers him to his band the next day as the alternate drummer. A twist of fate allows Andrew to become the core drummer and as a result, his confidence grows in his ability and he begins to ostracize all those close to him in order to have the success he craves. Yet, Fletcher makes sure he keeps Andrew on the edge and constantly reminds him that his place in the band is never safe.

Whiplash is far from the sugar-coated music or dance school films that cinema goers are accustomed to these days. While this subgenre tends to bask in the idea that performing arts schools are the institutions where your dreams are sure to come true, Whiplash seeks to destroy this fabricated image and remind that these schools are also places where dreams are slashed and only the strong survive in circumstances which can be incredibly brutal and often unpleasant. Andrew's constantly bandaged hands and the sweaty, intense competitions between those vying for the same part are reminders that hard work in such a place is very rarely clean and can often be physically demanding and psychologically taxing. While other films set in performing arts schools use exaggerated and optimistic elements such as overcoming the odds to win or be accepted, it is the fact that Whiplash doesn't do this and is realistic that makes it all the more captivating and entertaining. There is a great deal of suspense and unpredictability to the film which is very welcomed and refreshing as a result. 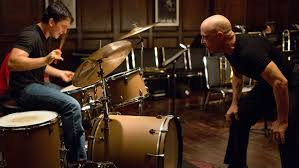 The screenplay is incredibly tight with witty and entertaining dialogue, which evolves from being quite comedic to begin with to being dark and menacing as the film progresses and the characters change. The music will inevitably delight those who appreciate jazz and it's use as part of the soundtrack when the character's are not playing it gives the film a nostalgic and classic atmosphere. The stage lights are taken full advantage of in the film by creating silhouettes for the characters in crucial moments and gives the moment greater importance.

Miles Teller's Andrew develops a great deal as a character throughout the film. To begin with, he is a self-proclaimed loner and is so in the most endearing way. His lack of confidence in himself, but obvious drive makes him incredibly likeable and the audience takes to him straight away. Throughout the film, the character changes into one who has qualities which are normally associated with a character audiences love to hate. However, the impact of Teller's performance at the beginning of the film is powerful enough that even though he changes for the worst, he is still the loved one of the film. Teller's delivery is spot on and his performance very physical, but in a completely natural way as he looks completely at home behind his drum kit.

In the teaching profession, music teachers can be among the most intimidating and often scariest. J.K. Simmons' Terence Fletcher takes this to a whole new level. Fletcher is the type of teacher which would haunt people's dreams for years to come with his words and twisted method of encouragement via intimidation. Yet, he gives the impression that there is another more gentle side to him. This impression is just that, as there is never actual confirmation that it exists. Simmons is terrifying, but at the same time completely brilliant. His words hit the viewer in the same way they hit the characters on screen and feel physical rather than verbal. Simmons and Teller are perfectly cast and work perfectly on screen, particularly in the last incredibly memorable scene of the film.

Whiplash is wonderfully unique and completely riveting. It is a joy for anyone who has attended a school specialising in performing arts to see a film which captures the intense reality of such an institution. However, it is also a joy for those who have only seen these places in cinema to play witness to a film that breaks stereotype in an incredibly courageous and honest way.