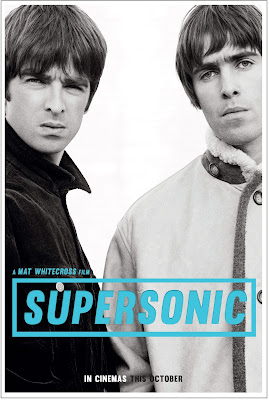 Oasis: Supersonic was reviewed as part of the 2016 BBC First British Film Festival.

Before I start, I have a confession to make which I know will effect the following review. I am a diehard Oasis fan. Normally when writing a review I try to avoid being bias at all costs because  I know I am not fooling anyone if I let my personal opinions about those involved in the film get in the way of writing a convincing review.

However, I'm willing to be honest about how much Oasis means to me for this review of Mat Whitecross' Oasis: Supersonic, because it is important for anyone who sees this film to understand how much it means to the Oasis faithful. Yet, the film is not just for fans of the Gallagher brothers. Supersonic explains the musical phenomenon that took place in the early 1990's and gives an honest and unapologetic view of the explosive feuds that often publicly occurred between the siblings and other members of the band.

Oasis: Supersonic looks specifically at the years between 1993-1996 when Oasis released their two biggest albums, "Definitely Maybe" and "(What's The Story) Morning Glory?", which led to them fast becoming one of the biggest British bands in history. Liam and Noel Gallagher, the boys from Manchester, quickly became household names not just because of their music, but also for their bad boy antics and intense sibling rivalry. The two brothers, along with others close to the phenomenon including their mother Peggy, narrate their way through the years with an insight into their music and personal lives that has never been heard before accompanied by unseen archival footage of the band before they reached the big time. 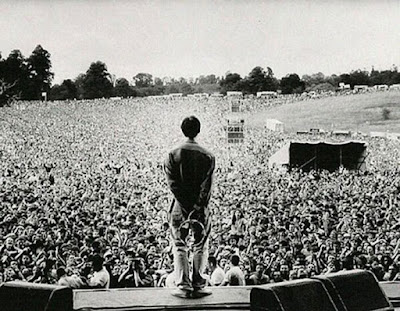 I first heard of Oasis and the infamous Gallagher brothers all the way back in 1995 when I had only just started high school, a daunting time for any young teenager. "Definitely Maybe" never took off the way it did in the United Kingdom in Australia, so the first song of theirs I heard was "Whatever". The song instantly made an impression on me as I listened to Liam sing about being yourself and not apologising for it, but it was when I heard "Morning Glory", "Wonderwall" and "Don't Look Back in Anger" all in a short space of time that I became a true fan. Of course, then I discovered "Definitely Maybe" and the song that still remains my favourite song to this day, "Live Forever".

As the Oasis machine gained momentum and the Gallagher brothers appeared more and more in the media because of their wild and seemingly untameable ways, I often had my friends and family express their distaste for my favourite band. Anyone who knows me will know that that just fuelled my passion for their music and made me like them even more. They even cancelled their 1996 tour to Australia which I had tickets for and I still remained an avid fan. After watching Supersonic, I am surprised they lasted until 2009...but I was absolutely distraught when I woke up that August morning to find out that they were no longer together. I had seen them live in concert three times as a band, with the final time being in Los Angeles in December 2008. However, I hated the idea of never seeing them live together ever again.

So why am I such a loyal Oasis fan?

I can pinpoint two reasons. On a personal level, I feel like Noel Gallagher has written the soundtrack to my life. Each album came out at a time where I could identify with the songs in relation to what was happening in my life at the time. Even now that new music has stopped being released, I can still listen back to their albums and find songs that somehow mean more to me now because it feels like the song was especially written for the situation I have found myself in ("Stop Crying Your Heart Out" is that song right now). It's such a special thing to be able to find some sort of peace and make life just a little bit easier in a song, particularly a song from your favourite band. That's what Oasis' music was about. When you look through their catalogue, one thing you notice is that there aren't any songs about life being depressing and things seeming hopeless. Noel Gallagher wrote songs about living life to the fullest and enjoying every moment of it. People responded to that and you can still see that even today with the way crowds will still sing "Don't Look Back in Anger" like the song has just saved their life.

I know I am only one of the many, many people out there who still loves Oasis for the reasons above. Since their split in 2009, there have been countless rumours about a reunion, but none that have any truth behind them. What Supersonic gives fans like me is the gift of hope. It's not only the fact that both the Gallagher brothers were executive producers on the film, but hearing Noel's final words in the film saying that he would go back and do it all again fills you with optimism that we may still see both brothers on stage together again. Of course, after watching Supersonic and seeing footage of their greatest concert at Knebworth, you are almost desperate for a sign that they could still come back, but the hope is really there. I can't speak for all Oasis fans around the world, but that was something I really didn't have much of before seeing Supersonic.

Supersonic is a lot of fun and very funny in parts, provided you understand Noel's dark, sarcastic sense of humour. One of the great things about the film is that even though both Liam and Noel were involved in the making of it, it doesn't sugar coat anything they did or said, nor do they try to defend themselves or make excuses. It is an extremely honest and well-made film about a band who had everything happen just a little too quickly, but lasted a lot longer than anybody ever thought they would in the circumstances.

Mat Whitecross has truly given Oasis fans something to believe in once again with Supersonic. Not only for Oasis fans, it is a wonderful study of the British music scene in the early 1990's, a time before the internet and other technological advances took over.