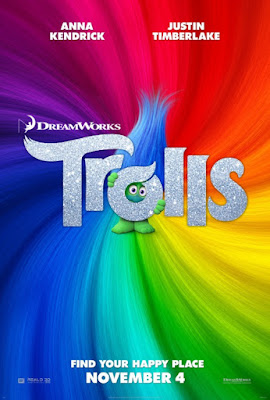 Trolls is now showing in the United States and is to be released in Australian on December 1. Distributed by 20th Century Fox.

Like it's protagonist, Trolls is a crazily colourful explosion of sparkling optimism that is a whole lot of toe-tapping fun for the whole family.

Based on the dolls that were at their height of popularity in the 1990's, the trolls are a community of happy little creatures with crazy hair who live in the safe haven of Troll Village away from the hideous and troll-eating Bergens. When one of their parties becomes a little too loud, their cover is blown and several trolls are taken away to fulfil the wishes of King Gristle (voiced by Christopher Mintz-Plasse). The brightest and happiest of all the trolls, Poppy (Anna Kendrick) decides to venture behind enemy lines to rescue her friends and she decides to take her polar opposite, the pessimistic Branch (Justin Timberlake) with her. The two unlikely partners in crime take a journey which results in the two learning more about life and the real world off each other than they ever thought possible.

Trolls is definitely not a film for the extreme pessimists of the world with it's over-the-top, but pleasant mantra of happiness. It is a particularly simple film that doesn't say anything more than what is being said out loud, which is that happiness is always inside you. Of course this works well for the younger members of the audience, but the film is also enjoyable enough for adults not to crave anything deeper. Yet, again, some adults may find the film a little too overly optimistic for their liking and this is something that will vary according to the individual. 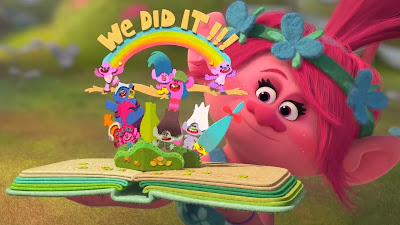 Directors Walt Dohrn and Mike Mitchell do not take the happiness theme lightly. Trolls is designed to have whole families leave the cinema with big smiles on their faces. Visually, the large majority of the film resembles a rainbow that has exploded, which is not a bad thing as Trolls really is beautiful to look at with it's amazing use of colour and all things pretty such a glitter bombs, cupcakes and long multi-coloured hair.

Then there is the uplifting musical score by Christophe Beck and executive music producer Justin Timberlake. Anyone who has heard the catchy Timberlake song "Can't Stop The Feeling" would have guessed the tone of the film without having to see it nor hear the rest of the soundtrack. The cast, which includes Timberlake, Anna Kendrick and Zooey Deschanel, have remarkable vocal talents which are on show with wonderful renditions of songs such as "True Colors", "The Sound of Silence" and "Hello".

There is no doubt that Trolls is definitely the most colourful and excitable film of the year. While some may find the film absolutely adorable, others who don't like feeling as though happiness is forced onto them will find it cringe-worthy.