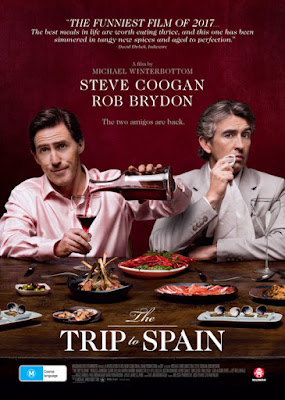 The Trip to Spain will be released in Australia on August 3 (Madman Films) and the United States on August 11.

The great thing about walking into The Trip to Spain is that you know exactly what you are expecting, as long as you have seen 2010's The Trip and 2014's The Trip to Italy. Britain's favourite comedy duo, Steve Coogan and Rob Brydon once again set off on another culinary tour, which this time takes them to Spain. Their latest venture is an absolute delight in the same nature as it's predecessors, with the exception of it's extremely odd and disappointing finale.

The Coogan and Brydon films are all edited from their original form of a six episode series made for British television. The films have never really been about the plot and while this may be a monstrosity in most feature films, it is an accepted and celebrated part of Winterbottom's films. There are themes and sub-plots moulded into the film which are welcomed and push the film along, but they are not the focal point of the film.

That being said, it does not excuse the extremely bizarre ending to this film. The unexplained last scene is so left-field and far removed from the tone of the rest of the film that it gives a sour last impression. This is such a shame as for the other 110 minutes, The Trip to Spain is as much fun as Coogan and Brydon have over their enviable lunches. 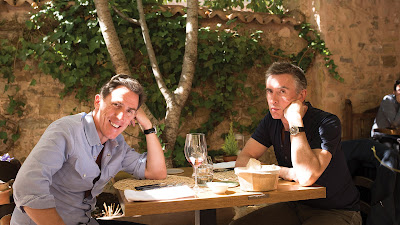 The partnership of Steve Coogan and Rob Brydon is, once again, comedic brilliance. The chemistry between the two is so natural and their conversational humour (which is largely improvised) is witty, smart, hilarious and completely unforced. As both The Trip and The Trip to Italy became infamous for the celebrity impressions Coogan and Brydon so frequently and accurately do, The Trip to Spain is stacked with these impressions. While many celebrities make appearances in the men's conversations that have previously been there (including Michael Caine, Anthony Hopkins and Roger Moore), there are some new additions that are just as funny such as  Mick Jagger and Ian McKellen among others.

The culinary delights and stunning Spanish landscapes are also highlights of the film. The six restaurants the two men visit all have incredible cuisine which photograph so well that they easily induce hunger in the viewer. The beautiful urban and rural Spanish towns which they visit are also shot beautifully and capture the charm and intrigue of the country.

The Trip to Spain is incredible fun and a delight to the senses. The hilarious conversations are memorable and do not lose their amusement long after the film has been seen, but in the same way the confusion and distaste for the finale also lingers.