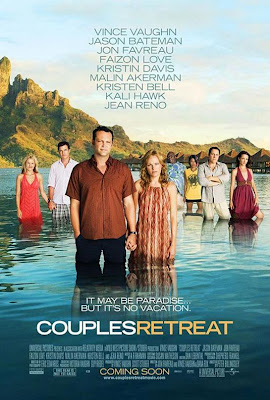 In My Own Words
‘Couples Retreat” wasn’t a movie I thought I would be seeing in the cinemas. I wasn’t even quite sure if I would be hiring it out on DVD. However, my other half reminded me that as a movie critic, I will have to go and see movies that I don’t personally want to see or would normally go and see. It’s not that I wouldn’t normally go and see a comedy like “Couples Retreat”, but more that I had heard mixed reviews about it. However, I’m not one to place too much emphasis on reviews until I’ve actually seen the movie, and then I’ll decide whether the review is true or not.
My intuition was pretty accurate. I wasn’t a big fan of the film. I felt it had some good underlying messages, but it was hard to decipher them due to the ridiculous goings on in the film. I didn’t think it was as funny as I thought it would be. Maybe it wasn’t my sense of humour, but I normally laugh at anything remotely funny. This is my first review I have written for here which I have written about a film that I didn’t like and I didn’t think was deserving of a good review. I have therefore found this review harder to write than the previous reviews I have done.
These are my own words and here is my review.

Review“Couples Retreat” is ultimately a comedy about marriage problems. Although there are lessons to be learned by watching this film, they are hard to find in amongst the attempts of comedy and a mediocre script and weak characters. The film had the potential to be a lot funnier than it actually was with such a strong group of actors, but fell short with only a few laughs. The film is focused around four adult couples, one of which is seriously contemplating divorce. They convince the other three couples to accompany them on a holiday to the resort, Eden which is especially for couples. All of the couples figure out that their marriages may be in trouble through couple bonding activities and counseling sessions.
The first thing one notices about the movie is that the script does not work. The scenarios that lead to the characters deciding to go on this retreat are extremely unrealistic. The main characters, Dave (Vince Vaughn) and Ronnie’s (Malin Akerman) two children speak like they are teenagers or even in young adulthood rather than young children and the technique that Jason (Jason Bateman) and Cynthia (Kristen Bell) use to brainwash the other couples is ridiculous. There are some laughs in the movie, such as Dave and Ronnie’s boy, Kevin’s toilet antics, but most of the comedic attempts are quite predictable. The movie itself is quite predictable and there is no real challenge in guessing who will stay together and who won’t. Where the background music is placed and the type of background music is also highly predictable.
The characters are weak and have very little character development, which really is a disappointment with such an ensemble of stars. Vaughn is not spectacular, but he does a good job. It is refreshing seeing Malin Akerman in a more mature role than her past roles in movies such as “27 Dresses”. There are really no horrible performances in the film, but it is by no means any of the actor’s finest performance.
The best thing about the film is the location in which it is filmed. Bora-Bora, Tahiti plays the role of Eden and is perhaps the best performance in the film. It is what makes the film worth watching and inspires the viewer to go on a holiday. The audience will find themselves watching the location more than the actors.
It is a shame that the script works against the movie as there are definitely marriage lessons to be learnt throughout the film, particularly in the last 20 minutes. These lessons may not be evident to everyone as a result of how the movie is pieced together, but they are definitely there if looked for.
“Couples Retreat” is by no means a movie that is what it could be, but is worth watching if you are a great fan of any of the stars, or if you are planning a trip to Bora-Bora in the near future.