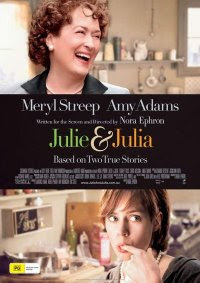 In My Own Words
I had been looking forward to “Julie & Julia” for quite awhile, so I had high expectations. Both Meryl Streep and Amy Adams are two of my favourite actors of our time, both actors who are versatile and extremely talented. I’ve never been much of a cooker, so it wasn’t that part that excited me, I was even half worried that it would be boring. Could a movie starring both Streep and Adams really be boring? I was worried about being let down.

Luckily, the day “Julie & Julia” opened in Australia, I won a “Julie & Julia” pack from Cronulla Cinemas! How did I win it? By saying in 25 words or less what my cooking specialty was, I answered “Picking up the phone and ordering gnocchi Bolognese”. I hate to admit that that is true, but I don’t cook very much. Mainly because my boyfriend is such a good cook that he puts me to shame. But, Cronulla Cinemas seemed to like it! As a result, I won two free tickets, an apron, an oven mitt, a mulit-chopper, a peeler and a “My Life In Paris” book by Julia Child. Unfortunately, I didn’t get to read the book before I saw the movie. It didn’t matter though.

I wasn’t let down by the movie at all, thankyou Meryl and Amy! I found the movie fun, enjoyable and entertaining. From there, I went home and researched both Julia Child and Julie Powell. I am really eager to read the book which the movie is based on now and I will do that, as soon as I get through my pile of other books I have to read.

The movie did inspire me as well, as I mention that it will in the following review. It reminded me that you must never doubt your abilities because when you set your mind to something, you can reach for the stars. Believe it or not, I may even try my hand at cooking.

These are my own words, and here is my official review.

Review
Whenever it is announced that Meryl Streep will be in a particular movie, the movie inherits a high level of expectation. Throw Amy Adams into the equation and there is another reason why “Julie & Julia” has so much to live up to. And as a result, the film is an absolute treat for food and movie lovers alike.

The two female stars of “Doubt” are reunited for the double story of Julia Child and Julie Powell. Streep stars as Child, the larger than life American woman who follows her husband to Paris in 1948 and undertakes cooking classes at the prestigious Le Cordon Bleu cooking school. From this beginning, she embarks on the journey that saw her becoming the pioneer of French cooking in the USA. Then in 2002 there is Julie Powell, the cubical worker who feels like she is stuck in her dead end job until she decides to undertake all the recipes in Child’s Mastering The Art Of French Cooking in the space of one year and blog her experience. The movie covers the story of both women and their trials and tribulations with life and cooking.

“Julie & Julia” is an enjoyable piece of work, with many recipes and delightful images that will hunger and excite the audience. The choices Nora Ephron makes in for this film are commendable. Her choice of Streep for the role of Child is excellent, with Streep becoming the late Child down to the finest detail. Although Streep is nowhere near the 6’2 height that Child was, the camera is able to transform her so that she towers of her co-star, Stanley Tucci. The pairing of Streep and Tucci as husband and wife may seem like an odd pairing, but they replicate Julia and Paul Child and do it well. Adams is also note-worthy as Powell, making her character one that the audience can definitely relate to.

Audiences will enjoy the film for its script and story especially. The tale of these two women is one that many people will relate to and find inspiring. Both Julia Child and Julie Powell had goals in their lives (both based on cooking) which transfer the message to the audience that people are able to do something that they love and have a good life doing so. The audience should leave the cinema feeling inspired and eager to fulfil their dreams, just like the lead characters in the film. This film should also increase sales of Child’s novel “My Life In Paris” and Powell’s “Julie & Julia” for this reason.

The way in which marriages are portrayed in this film is particularly interesting. Both the Child’s and the Powell’s have seemingly happy marriages. Admittedly, it is not smooth sailing throughout the whole movie, but the majority represents husbands willing to support their wives in their chosen dreams. It is a wonderful thing to see happy marriages on the big screen, but is it too light for the audiences? Some may find it so, but considering it is based on true stories, one must accept that the two couples were in fact really happy and can be seen as an example of what makes a marriage work.

Overall, the film may not be a big contender for the 2010 Oscars, but it is definitely enjoyable and a delight to watch.