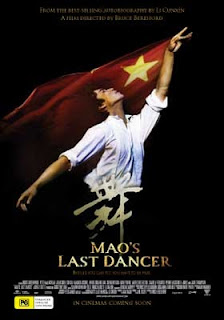 In My Own Words
I admit, when I first heard about “Mao’s Last Dancer”, I knew absolutely nothing about the intriguing and amazing story of Li Cunxin. My other half and his mother were big fans of his though. Not just of Li Cunxin the ballet dancer, but of Li Cunxin the person, the survivor and the motivator. So they were both extremely excited about the movie.
After seeing the movie, I too am now a big fan of Li Cunxin. I went and bought his autobiography today and I really look forward to reading it. I have heard that the book is better than the movie, as is the case with many books. I could imagine how it would be as it is supposed to go into more detail than what is shown in the movie. As Cunxin wrote the book, I am also interested in hearing the story first hand, rather than see the story from an outsider’s perspective on the big screen.
By all means I did enjoy the movie, but I am actually expecting more from the book than the movie. The movie, however, is a must see for dancers, as well as those interested in eastern culture, specifically communist China. In this way, I found it extremely educational for both fields. The ballet is extremely entertaining and beautiful to watch on the big screen. People who would have seen the Australian Ballet before will recognize many of the dancers in the movie.
My favourite part of the movie was the finale, which I found particularly beautiful and moving, however, a little cliché. Yet, like my last movie review, it was a true story and the truth is the story.

There are my own words and here is my official review.

Review
Many people will be familiar with the story of Li Cunxin and his amazing journey from communist China to the Houston Ballet Company in the USA. “Mao’s Last Dancer” is a film for those people and also for those who don’t know much about his tale.
Li Cunxin(Chi Cao) was taken from the poverty of his home in Qingdao, China and placed in the Beijing Dance Academy in the 1970’s. Cunxin, as a young dancer, experienced years of grueling training before he was selected to travel to the United States as an exchange student for three months. When he decided that he wanted to stay in the United States rather than return to China, he was part of a highly publicized detainment in the Chinese Embassy in which resulted in him being banned from ever returning to China to see his family. The film covers the twenty years of Cunxin’s life where he goes from childhood poverty to reaching international fame in his adulthood for his incredible dancing.
“Mao’s Last Dancer” chronicles the life of Li Cunxin well, as it extracts the most important parts of the dancers life and packs them into 117 minutes. Chi Cao, who looks uncannily like a young Cunxin himself, is brilliantly cast. He gives a wonderful performance as Cunxin and is a fantastic dancer in his own right. He captures the naivety and emotion of Cunxin throughout the movie and is definitely commendable in his role. Amanda Schull, who plays Cunxin’s once wife Elizabeth Mackey, is also a stand out in the movie. She is believable as the young dancer striving to find herself as well as support her lover. Australian viewers will also find delight in seeing Jack Thompson as the US Federal Judge, however brief his role.
The ballet performances in the movie are also a major highlight that ballet fans and those not familiar with ballet will find entertaining and beautiful. The producers of the film employed dancers from China, America and Australia The dancers are all spectacular and give breath-taking performances, and they should not be forgotten in the praise of this film
However, it does feel as though the film lacks depth in parts. The major part which there is a lack of depth are the scenes in China. The struggle of life in poverty does not transfer to the audience as much as it could and the audience does not feel as much sympathy for those in Qingdao as they could. Their hardships are not shown as there is little of Qingdao shown, while there should be more as to show where Cunxin came from and his reason to want to return so much. Fans of the book will be disappointed in the film for this reason.
“Mao’s Last Dancer” is indeed a beautiful movie with some amazing scenes, but it still could have gone further than it did. It may not be a film for everyone, but there are many people out there who will enjoy it immensely. The film is a fitting tribute to an amazing man and does him and his struggle justice, which is the most important thing.