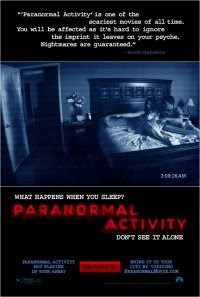 In My Own Words
Well, the famous “Paranormal Activity”. If you haven’t heard of this movie, you soon will. The film that cost $15 000 to make, made $9.1 million in its opening week in the USA and many people are saying it is the scariest of our time. It was these things that made me more terrified of whether the movie would let me down than what I would see on the screen. However I was not let down. Although I don’t think my fingernails will forgive me for awhile.

“Paranormal Activity” is not actually released in Australia until the 3rd of December, but being Halloween, Event Cinemas had an advance screening at 9:30pm. After how much I had heard about it and looking for something to do on the usually uneventful Halloween nights in Sydney, I jumped at the chance to go and see the film before everyone else. The one thing I regret about this is being in a cinema half full of teenagers who just went to giggle and scream. However, I still shook with fear and came out breathless, feeling like I had been holding my breath for the last 20 minutes. Here I am an hour later at home, with one of my friends who couldn’t bare to go home by herself. Instead we are continuing the Halloween festivities and watching a documentary on “The Amityville Horror”.

Will my three friends and I be able to sleep well tonight? Will we be hearing loud noises in the middle of the night? One thing I can say for certain, “Paranormal Activity” is the scariest movie I have ever seen at the cinemas.
These are my own words and here is my review.

Review“Paranormal Activity” is one of the most talked about movies of the year, and with good reason. It is indeed a movie that will scare the majority of people who will watch it. The movie is very clever and well done for the type of movie that it is. By saying this, it is not filmed like a traditional movie, but in the same style as such movies as “The Blair Witch Project” and “Cloverfield” with the hand held camera effect. This effect makes it more realistic and contributes to the terrifying nature of the film.

Katie and Micah are a young couple who have been experiencing strange happenings in their suburban home in San Diego. Katie is certain that something not human has been following her around for the majority of her life and that the house is not to blame. Micah then sets up a camera to record any activity that occurs around them as proof that Katie is telling the truth. What follows is a month of terror in which the paranormal activity goes from bad to worse.

This film is not only scary, but is also well made considering the circumstances. “Paranormal Activity” cost only $15 000 to make, was completely filmed in director Oren Peli’s house and used unknown actors, Kate Featherston and Micah Sloat. A film that is able to have such a low budget as this one did and cause such a sensation and be the source of nightmares for so many people is definitely a winner. The special effects are extremely realistic and the acting by Featherston and Sloat is both well done and convincing. Featherston is definitely the star of the film as the tormented student and one can only hope that she will have a career past this phenomenon. She overshadows Sloat, who is good in his role as her boyfriend, but not spectacular. Perhaps the worst performance is by Mark Frederichs who plays the psychic, who’s part is the most rehearsed in the film and doesn’t quite fit in with the overall scope of the movie.

The film may not be for everyone, especially those who are not into horror films and do not like being scared. However, those who don’t mind being scared a bit, should definitely go to see “Paranormal Activity”. Not only because it do definitely provide a scare, but it is worth seeing how such a low budget film can be so successful and low budgets don’t mean low quality. The script is carefully planned out, original and very clever. The way Peli has written and directed “Paranormal Activity” is perfectly laid out. A connection is made with the characters straight away and the audience knows Katie and Micah’s background in the perfect fashion for the circumstances.

As said before, this film may not be everyone’s cup of tea, but it is great for what it is. “Paranormal Activity” may not win any Oscars, but it will scare, entertain and audiences will enjoy the realistic qualities of the movie.