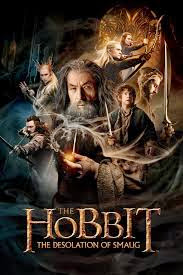 The Hobbit: The Desolation of Smaug is now showing everywhere and is distributed in Australia by Roadshow Films

There is a lot to talk about when it comes to The Hobbit: The Desolation of Smaug. Funnily enough this reflects the film and the series of films quite well. There is a lot going on in the film so it is only to be expected that there would be a lot to discuss. However, unlike the book to film adaptation, we don't have that much to talk about to make three posts about it.

There is absolutely no denying that The Hobbit: The Desolation of Smaug is a very well made film and has intended to make the most of everything available to it. After the incredible success of Peter Jackson's adaptation of J.R.R. Tolkien's  The Lord of The Rings, The Hobbit is extremely reminiscent of the former and maybe even trying a bit too hard to be it. It really depends who you are as to how you feel about this. Some people will be over the moon that they are lucky enough to be indulged once again with Middle Earth, while others just won't be able to get past the fact that three films are being made out of one book and therefore have added so much which wasn't in the original film. For a Tolkien fan, this film holds a lot of emotional baggage, both good and bad.

The Hobbit: The Desolation of Smaug begins where The Hobbit: An Unexpected Journey left off, as Bilbo (Martin Freeman), Gandalf (Ian McKellen) and the band of dwarves make their way to Erebor to reclaim their homeland. Along the way they come into contact with the elves and the people of Lake-town, while they try to avoid capture and death at the hands of the Orcs who are following them. As Bilbo tries to resist the power of the ring which he is carrying, he also must gather all the strength he can as according to the dwarves, he is the thief who must venture into the mountain and at all costs try to avoid being noticed by the fearsome dragon, Smaug (voiced by Benedict Cumberbatch). The computer generated images used in the film are spectacular. The creation of Middle Earth locations such as Mirkwood, the Elf Kingdom and inside the mountain are incredible. The final scene in which the dwarves and Bilbo are taking on Smaug really is a visual masterpiece with the CGI perfecting the location as well as the enormity and magnificence of the dragon. The make-up used for characters such as the Orcs and the skin-changer, Beorn (Mikael Persbrandt) is very well done and in the case of the Orcs, very scary. The action sequences are also enhanced by CGI and although very impressive, can get to the point where they seem just a little too far fetched and ridiculous. For example, the scene where the dwarves are being swept down the river in barrels and trying to escape the Orcs while Legolas (Orlando Bloom) holds them off is just way too choreographed to be taken seriously.

Martin Freeman once again does well as the lead character, Bilbo. He gets very much into character and is very consistent with this character from the beginning to the end of the film. The role doesn't call for any huge emotional scenes in this film and all of his establishment of character is done in the first film, but he does as well as anyone could in the role. Ian McKellen is always an absolute thrill as Gandalf and every scene he is in is enhanced by his presence. 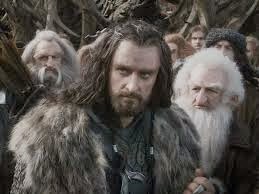 Richard Armitage, who plays the dwarf Thorin does well, although his performance borders on corny in the final scenes. Luke Evans as Bard is actually quite an interesting character and has a real sense of mystery to him. Evangeline Lilly's performance of the female archer elf Tauriel feels very overdone, while Orlando Bloom doesn't do too badly even though his Legolas doesn't have a great deal to work with. Benedict Cumberbatch's gives voice to both Smaug and also the Necromancer is quite interesting and fitting, particularly for Smaug.

The Hobbit: The Desolation of Smaug will and has already done well due to the intrigue that Peter Jackson has created in his adaptations. His film making is known by all for being ambitious but successful and this film is a perfect showcase of his skills.