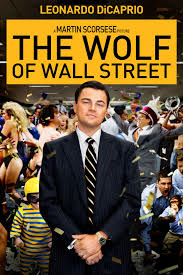 The Wolf of Wall Street will be released in Australia on the 23rd January 2014 and is distributed by Roadshow Films. Now showing in the USA and UK.

The Wolf of Wall Street could not have avoided being highly anticipated. Let's face it, the majority of films being released at this time of the year usually have huge expectations on them. However, when you put the names Leonardo DiCaprio and Martin Scorsese in the same sentence, you expect something pretty special. Yet, you also worry that these two pairing up for another critically acclaimed film may be too good to be true.

Well this is the news. The Wolf of Wall Street is another amazing piece of work by the dynamic duo. The story of the "Wolf" is intriguing and entertaining and keeps the viewer's undivided attention for the entirety of the film. The film is unexpectedly hilarious and pleasingly shocking at the same time, while also making you contemplate the ethics of the actions of Jordan Belfort. Leonardo DiCaprio is a force to be reckoned with in his fifth partnering with the great Martin Scorsese and the combination of these two proves once again to be a winner.

The Wolf of Wall Street is based on the novel of the same name and tells the rise and fall of stockbroker, Jordan Belfort (DiCaprio). From his beginnings as a naïve but determined rookie of Wall Street, to his fall as a result of his illegal and unethical activities at his firm, Stratton Oakmont Inc., Belfort doesn't lead a boring life in any way shape or form. He enjoys the perks of the high life including the luxury apartments, Long Island property, unlimited girls and a ridiculous amount of drugs. His addictive lifestyle is extremely hard to give up, but the FBI is always watching him and one wrong step and he will have no choice but to give up his lifestyle and everything that goes with it. 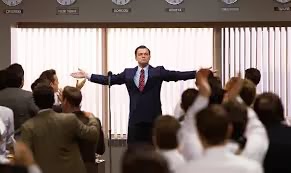 Jordan Belfort's story is not one of a hero. At one point in time he was idolised by so many, but he is ultimately the villain of his own story. His actions and treatment of people are not desirable and it does absolutely make you look at the stockbrokers in the big city in a different way, regardless of whether they are like Belfort and his team or not. It's not likely that most of the things that went on in his office still occur, such as using prostitutes and strippers as a reward for good work actually in the workspace in work hours. Yet the film does make you stop and think about the ethics of someone such as Belfort and for the large majority of the film, he is not a very likable specimen.

However, this works in a big way. Belfort may not be likable and his practises not ethical, but his story is absolutely enthralling. You may not like him or what he does, but you love watching him. The whole film is incredibly entertaining and even if you do not condone his bad boy ways and his lifestyle, you can't look away. Scorsese has brought Belfort's story to the big screen in spectacular fashion. The Wolf of Wall Street completely captures the extravagance of his story and you feel as though you could be having as much fun watching the story as Belfort was living it. As a viewer you feel the thrill the stockbroker would have been experiencing living on the edge.

The screenplay, written by Terence Winter is also spectacular. It is a pleasant surprise and brilliant how hilarious it actually is, especially the scene where Belfort is at the Country Club. It is a brilliant thing to be able to take a true story and make it a lot more funny than what it would have been in real life. The one factor that may deter many people away from The Wolf of Wall Street is that it is a minute short of three hours. As much of a thrill as it is, it does feel like it is this long. Obviously there was a lot to get through and the three hours does seem acceptable for how much Scorsese had to cover. It is also quite obvious that what we are seeing is the shorter version of all the footage that would have been taken. There are various features of the film which are skimmed across at lightning speed and some things which can be seen as a bit confusing (particularly at the end) because they are not explained thoroughly.

The soundtrack for the film is extremely fitting and actually quite enjoyable itself. The cinematography has some very Scorsese-esque moments, but this is in no way a bad thing. Every shot is interesting and though there are some full frontal and confronting shots, the photography is perfect for every scene. The film and it's costume design, location and interior design is very reminiscent of the time period every scene is set in. 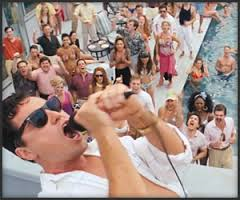 Leonardo DiCaprio has had many outstanding performances throughout his career, but this is one of his best to date. DiCaprio's Belfort is intense, proud, unpredictable and just a bit of an egomaniac, and he is absolutely fantastic to watch. He truly becomes his character and displays every facet of his personality. Even though the film is three hours long, you wish you could just on watching him because he is such a joy to watch. The scenes of him giving speeches in his office are just brilliant.

Jonah Hill is great as Belfort's best friend and wing man, Donnie. Margot Robbie, who plays Belfort's wife Naomi is an absolute starlet in this film and so convincing. Her American accent is brilliant and unless you knew better, there is no way you would ever guess that she was actually Australian. One thing this film is missing is enough Matthew McConaughey. He plays the role of Belfort's mentor when he first arrives on Wall Street of Mark Hanna and is so charismatic and hilarious. He is only in the film for a short time, but absolutely memorable regardless of how long he spends on screen.

The Wolf of Wall Street is an absolute pleasure to watch and for some may be the true definition of a guilty pleasure, because you know you shouldn't enjoy watching bad behaviour so much.