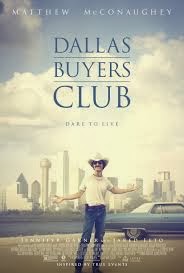 Dallas Buyers Club will be released in Australia on the 13th February and in the UK on the 7th February 2014.

Dallas Buyers Club is one of the most memorable films of this award season thanks to the incredible on screen performances by Matthew McConaughey and Jared Leto.

Jean Marc-Vallee's film has attracted a great deal of attention and rightly so. It is the intriguing characters and the way in which they are portrayed which makes Dallas Buyers Club an absolute must see. However, without these career best performances by Matthew McConaughey, Jared Leto and Jennifer Garner, it would become a great deal more evident that the screenplay is less of a story than an outlay of a series of events. Yet this is forgiven as there is more right with this film than is wrong with it.

Dallas Buyers Club is the true story of Ron Woodroof (McConaughey), an electrician who in 1985 was diagnosed with HIV, a disease which was relatively new at the time and believed by many to be primarily a homosexuality related illness. Woodroof, who was straight in the most outspoken way, was given 30 days to live and is ostracised by all those around him who are ignorant to the fact that sexuality doesn't play a part in whether or not you can catch the disease. As Woodroof proves all the doctors around him wrong, he realises that there are better ways to survive with the disease and sets out to give HIV/AIDS sufferers like himself the freedom to choose their own medication and survival methods for themselves. 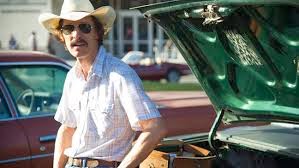 Dallas Buyers Club is a very interesting and entertaining film. The details of Woodroof's quest for freedom of choice for himself and those around him is intriguing and for those who have not heard his story or have not had anyone close to them be diagnosed with the illness, is a great medical and history lesson. What many will notice about Dallas Buyers Club, is that it is not told in the typical narrative form. It is more a series of events told in the order in which they happened and is more of a biography played out on screen rather than a narrative. Although the subject matter of HIV/AIDS is a particularly sensitive one, the film isn't quite as emotionally charged as one would expect. However, it's power remains in the subtlety of the film and what isn't shown as opposed to talked about. It is the crucial deaths that are not seen and the big emotional reactions that are visually absent that are powerful in themselves. At times though, you almost feel as if you want these big moments in the film, but still feel that the subtlety was effective in itself.

The editing of the film is very well done and there are some very interesting cinematography choices. Dallas Buyers Club is not a pretty film by any means and does contain location shots which can be described as grimy and generally unattractive. Yet the way that these scenes are transferred onto film is very well done. It is an incredible thing to take locations such as run down caravan parks and run down Texan bars and make them the most interesting thing to watch on screen.

Matthew McConaughey plays the part of Ron Woodroof perfectly. He starts off as an unlikeable and irritating character who is on the path to further self-destruction as a result of the inability to put effort into changing his ways and helping himself. Yet, his character develops and becomes a convincing hero to those close to him and the hero of the film. McConaughey plays the role like he was born for it. The way in which he becomes inspirational is unconventional and he really plays the unconventional hero brilliantly. 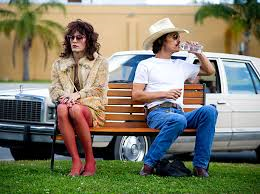 While McConaughey is really brilliant and at this point in time is tipped to take home the Academy Award for the role, it is Jared Leto who steals the show. Leto plays transgender AIDS patient, Rayon who becomes Woodroof's unlikely partner in crime. It is a strange thing to say that a heterosexual male actor plays a transgender role naturally, but that is exactly what Leto does. At no point in time throughout the film does he break out into the over-the-top stereotypical behaviour that we so often see actors portraying a transgender or cross-dresser on film do and he really is so natural. His performance flows beautifully and he is perfection to watch. McConaughey and Leto work well on screen together and although there is a definite chemistry there, there isn't much relationship development. These two obviously care about each other, but the there is not much to show how they got from the point of hostility to best friends. As amazing as McConaughey is, Leto plays him off the screen in every scene they are in together. It is Jared Leto who really does give life to the most interesting character in cinema of the past year.

Jennifer Garner, who plays Woodroof's doctor and friend, Eve, is also very good and perhaps gives the best performance of her career so far. She is once again very likable and natural on screen, but her performance is over-shadowed by her make co-stars a great deal.

Dallas Buyer's Club may not be suspenseful, but is still interesting and entertaining thanks to two of the best performances of the year. Matthew McConaughey is amazing, but it really is the Jared Leto show.