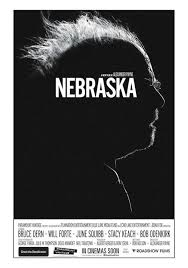 Nebraska is now showing in cinemas across Australia and is distributed by Roadshow Films.

Nebraska is one of the cinematic rarities of recent days with it's perfect screenplay and cinematography completely capturing all the essence of this father-son American road trip.

While Nebraska can be harrowing at times, it is also a humorous look at family relations and human nature. Alexander Payne has wonderfully directed a brilliant screenplay by Bob Nelson, which brings startling real characters to the screen in the most interesting and endearing way as a result of some incredible performances. Filmed entirely in black and white, Nebraska heightens our senses with it's wonderful cinematography and we see the world in a new and beautiful way.

When the aging Woody Grant (Bruce Dern) is found trying to leave the Montana town he lives in by foot, he is picked up by a police officer before he makes it too far. When Woody's son, David (Will Forte) arrives at the police station to pick up his father, Woody tells him that he has won one million dollars in a sweepstakes and was on his way to Lincoln, Nebraska to claim his prize. David tries to convince his father that he hasn't won a million dollars and that the sweepstakes is just a scam, but Woody cannot be swayed. After he once again tries to make it on foot to Nebraska, David agrees to drive his father to retrieve his million dollars and the two set off on a father-son road trip. 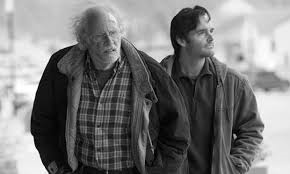 Nebraska is a wonderfully original piece of work. The screenplay is just outstanding and story beautiful. Although it is so natural in it's delivery of family relations with elderly parents and of small town USA, it avoids cliché completely. You are left completely clueless as to how the film is going to end until the last scene. This is because although Nebraska is actually a very funny film thanks to some extremely amusing dialogue, it is also tinged his sadness throughout. It has a healthy mix of these two types of film and keeps you guessing as to in what direction it's conclusion will take place. It is not a fast paced film, but the ending makes the pace well worth it.

The film is also incredibly real, but the fact that it is filmed in black and white takes part of the realism away. The characters and scenarios are all so realistic. It is so interesting watching the dynamics of the characters, particularly in the way peoples behaviour changes when they believe that Woody is actually a millionaire. The relations between family members are a stand out in the film. The relationship between Woody and his wife, Kate (played by June Squibb) is brilliant. It is a relationship that won't seem too far removed from many others in such a long term marriage. They drive each other crazy, but don't know what to do when the other isn't there. Then there is also the relationship between David and his brother, Ross (Bob Odenkirk), which shows the all too familiar scenario of two brothers who grew up to be so different, but when they get together, they find their youth again. The extended family relations also ring true, particularly the scene where Woody and his brothers are all watching television together.

While making a film in black and white isn't an overly popular concept these days, it visually works to Nebraska's advantage. You honestly believe that the film's locations are more beautiful for the lack of colour. The opening scene is a terrific example of this. As the film opens with Woody walking up a road with Billings, Montana in the background, you are overcome with how beautiful the shot is, even though it is a location you would not typically associate with beauty. The black and white just brings out the true character of the locations. Colour would seem to be a distraction in this film, as with the lack of you grasp the true atmosphere of each location. You feel the chilling cold weather and the small town vibe of Hawthorne, which wouldn't be as prominent if colour was present. 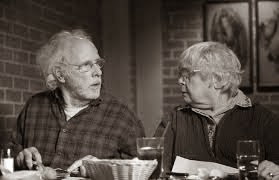 Bruce Dern is superb in Nebraska. He may not say much, but you can tell so much from his expressions. He is a source of worry for the audience, as you truly become worried about him being taken advantage of and as a result he is the driving force behind the film. Again even though he doesn't say much, when he does his dialogue is so entertaining. He is heartbreaking yet subtly comical at the same time.

Will Forte does well, but is over-shadowed by Dern and also June Squibb. His role is very natural and again ahs some very funny moments. Squibb is an absolute riot. She plays the part of the irritated and frustrated wife who is fed up with Woody's antics so well. Kate is a wonderful character and is not for one moment dull with her colourful and very amusing dialogue.

There are many reasons to see Nebraska, but it is the last scene which turns it from a very good film into an outstanding film.