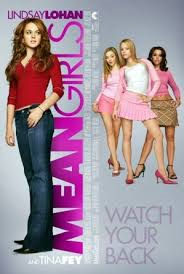 April 30 this year will mark the 10th anniversary of the release of Mean Girls. The film itself has become somewhat of a cult classic with it's wicked sense of humour, timeless themes and extremely quotable dialogue. The film is as relevant now as it was 10 years ago and although it has all the elements that would make it a teenage film primarily for girls, it reaches far beyond those boundaries. Mean Girls was responsible for making several of it's stars household names, including Lindsay Lohan, Rachel McAdams and Amanda Seyfried. With it's anniversary looming, taking a look back at the film reminds us why it was such a success when it was released and why it still remains a favourite of many.

Cady Heron's (Lindsay Lohan) first day of school is not like most people's. She has been home schooled while living in Africa with her parents her whole life, and her first day of regular school is as a sixteen year old. It's a complete shock to the system for Cady as she tries to learn the protocol of cafeteria dynamics at her new high school. She is quickly taken into the guidance of Janis (Lizzy Caplan) and Damian (Daniel Franzese), two misfits who are the most loyal of friends, and they give her the rundown on who is who as far as the cliques go at North Shore. The warn Cady to stay away from the Plastics, who are the most popular girls in school, but also the most evil. Yet, Cady is drawn into the world of teen queens, Regina (Rachel McAdams), Gretchen (Lacey Chabert) and Karen (Amanda Seyfried) and discovers that being one of them is better than to be in the Plastics hating life than not being with them. 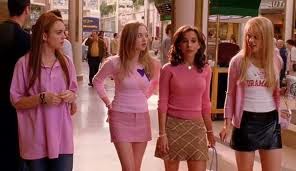 Based on the book, "Queen Bees and Wannabe's" by Rosalind Wiseman, Mean Girls is a thoroughly entertaining look at the female dynamics of high school. The reason the film remains as relevant today as it did in 2004 is because the way females interact in high school is really timeless. There will always be the popular girls known as the Queen Bee's who are like the celebrities in every school that everyone wants to know everything about and want to be liked by. With every popular group of girls, there are always the groups which are "below" them, and Mean Girls doesn't forget about these girls either. The film is completely relatable to girls who are in the same age bracket as the ones in the film, but this doesn't mean it is just for teenage girls.

Mean Girls is a lot of fun for people of any age and not just for girls, also for boys. Boys may not be able to relate to the film as much as girls can, but will still be able to relate to it in that they will remember seeing all this happen around them. This isn't to say that all of the situations in the film are relatable, but it is no secret that girls can be extremely mean to each other and while they may not all actively plot to destroy each other's figures or get them in trouble with the headmaster, they can do some pretty horrendous things to one another. The screenplay written by Tina Fey, who also stars in the film as Mrs Norbury, allows people to see these high school dynamics in an extremely amusing fashion. The screenplay is wonderfully witty and funny. There are so many memorable quotes throughout the film which just seem to resonate in pop culture. The internet age also brought a new life to these quotes as there are various memes online with these sayings and people love to use these quotes in everyday conversation. Even though Regina did not believe "Fetch" was going to happen, it has indeed happened.

Along with the wickedly funny dialogue, the film maintains it's playful style with such scenes as the girls singing and dancing to "Jingle Bell Rock" and other acts at the talent show including Kevin Gnapoor's (Rajiv Surendra) rap and Damian's rendition of Christina Aguilera's "Beautiful". All the characters are so well defined and all individual. They are all very different and are all so in depth (unlike many characters in the typical teenage genre film) and wonderfully developed. The soundtrack is also perfect for the film, as it is playful and every song is used to accentuate the scene which it is used in. 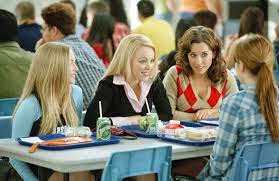 Lindsay Lohan snagged a huge amount of fans after she appeared as Cady here. Not only was she perfect for the part, but she was just overwhelmingly likable. Her naivety in the first half of the film is so endearing and beautiful, that although she changes throughout the film, she still remains an audience favourite.  Her character development is purely perfection as it is gradual and not a sudden change in attitude that seems unrealistic. This was, and still is Lohan's best performance to date due to how much the audience empathizes with her and her persona.

Rachel McAdams is so wicked that she is great. Her Regina may seem completely shallow, but she is a complex villain due to her manipulation skills. You want to see her fall from her pedestal, but love watching her at her worst. It's a completely different role to what McAdams has done since then and is still her most believable and interesting. Lacey Chabert is a lot of fun, as is Amanda Seyfried, who like McAdams, has not done anything like this role since. Lizzy Caplan and Daniel Franzese both do well. They are two different characters who almost seem like one entity on screen and they are fantastic to watch together. Tina Fey does well, and Amy Poehler is hilarious as Regina's mother.

While it may be 10 years since we were first introduced to the cliques of North Shore High School, it doesn't feel like it as Mean Girls is as relevant now as it was then. It is hard to imagine that it would ever lose it's relevancy as as long as there is high school, there will be mean girls.