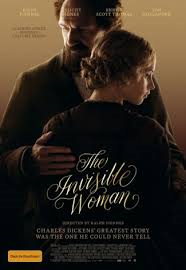 The Invisible Woman is a beautiful piece of period cinema. It tells a widely unknown story about a well known public figure who had another side to him, which makes the story as well as it's stunning visuals intriguing. While it is visually pleasing and wonderfully acted, The Invisible Woman is also incredibly slow moving in order to build emotional tension. This pace can also work in the opposite way as it slows down the film dramatically and allows the story to lose momentum while it is trying to build your senses.

The Invisible Woman tells the story of Charles Dickens' young mistress, Ellen Ternan. Ellen, otherwise known as Nelly (Felicity Jones) first met Dickens (Ralph Fiennes) when her and her family travel north to appear in one of his plays. Ternan was an admirer of his work beforehand and is in awe of her literary hero, while Dickens is quite besotted with the youngest daughter of Frances Ternan (Kristin Scott Thomas). As he is feeling a great distance being drawn between himself and his wife, Catherine (Joanna Scanlan), Dickens peruses Ternan who at first resists his charms in an attempt to protect her reputation, but cannot deny that she feels the same way about the charismatic writer.

The story The Invisible Woman presents us what you want to see when you go to a biographical film and that is a story which we have not heard before. The existence of the relationship between Dickens and Ternan was not a widely known one at the time, although talk did exist in the rumour mill. It wasn't until both parties were gone that their relationship became more well known. It is always a good thing to see an unknown aspect of a public figure in a film as it presents something new and intriguing. The screenplay is quite well written and the language used is perfect for the time period.

It is the pace of the film that is the real talking point. The Invisible Woman is really very slow and the use of flashbacks at different points throughout the film makes it even slower. The pace is used as a technique to build emotional tension, so you are able to feel the rise in feelings between Dickens and Ternan and really be absorbed in the beauty of the film both visually and mentally. However, it doesn't do much for the building of tension in the actual story. There is a very calming atmosphere to many of the scenes and while this is a beautiful and subtle aspect of the film, it doesn't do anything for the suspense of the film. However, the film is not supposed to be a highly suspenseful film, it is a film which is largely character driven and wants you to be swept up in the characters emotions in the same way they are and the pace must be used as a tool for this. This may not be to the delight of everyone though, as many people want a film to be driven by the suspense in the story rather than emotional tension. 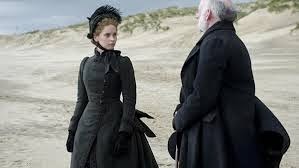 The Invisible Woman is what every period film should be. It is extremely atmospheric and visually stunning. You live and breathe England in the 1850's while you are watching Dickens and Ternan. The architecture is exquisite and the set design of interiors of the houses are wonderfully fitting for the time period. The outside locations are so peaceful and calming and are beautiful in every way. The costume design is also wonderful, particularly that of the Ternan girls dresses.

Ralph Fiennes and Felicity Jones are both wonderful in this film. Fiennes completely embodies the great writer and is so captivating when he is on screen. He is able to uncannily give the impression of his character having many layers to his personality without having to exhibit these layers. Fiennes is also one of the wonderful actors who has the ability to direct himself perfectly. Felicity Jones is gorgeous as Ellen Ternan. It is wonderful to see Jones in a role like this and it feels as though this is her first really grown up role. She plays Ternan with a perfect amount of innocence and naivety, while also showing that she is also strong and of high morals. The chemistry between Fiennes and Jones on screen is very good. It may not be electrifying, but there are some very beautiful moments between the two which show how much romantic tension there is between the two of them.

Joanna Scanlan, who plays Catherine Dickens is also very good. Her character is quite interesting as she is the opposite to Ternan in every way, but also has some very endearing qualities. The scene when she comes to visit Ternan is brilliant as she doesn't assume the role of the scorned wife, but of a woman who is really not quite sure what to do in her situation and doesn't want to cause a scene. It is also interesting watching her and Fiennes in their scenes together, as there emotional and physical distance is not glaring obvious, but subtle. You do feel a great sympathy for her and Scanlan does well to evoke this.

The Invisible Woman is a beauty of a film and a wonderful period piece. Yet it's pace makes it not a film for everyone as it gives too much to one goal and not enough to the other.