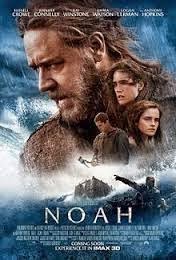 If there is one thing that can be said about Darren Aronofsky's Noah, it is that it's most definitely ambitious. It is a huge story to tell, controversial and visually demanding to bring to the big screen. You have to give Aronofsky huge credit for taking on the task to make this story into a film and with all factors considered, he has done a good job. It is most certainly interesting to see how Aronofsky has put his spin on the biblical figure. Although far from a perfect film, there are many good things and is a film that is just asking for you to have a heated discussion about it with others.

In the Garden of Eden, Adam and Eve had three sons, Cain, Abel and Seth. The descendants of Cain and Seth walk the Earth, with the descendants of Cain building civilisation and coming to represent the wickedness in men. Direct descendant of Seth, Noah (Russell Crowe) receives a message from the Creator that he is going to send a great flood to end the world of man. Noah, his wife Naameh (Jennifer Connelly) and three sons, Shem (Douglas Booth), Ham (Logan Lerman) and Japheth (Leo McHugh Carroll), as well as an orphaned girl they take in, Ila (Emma Watson), start building an ark which will save the innocent animals of the Earth when the flood comes. Noah's quest does not come without great responsibility and sacrifice, and he tests the loyalty of all those close to him.

This film was always going to cause a huge amount of controversy. Noah has been banned in several countries including Qatar and United Arab Emirates as it is seen to contradict Islamic teachings. It has also been controversial among both Christians and Atheists. While the name God is never uttered in the film, several biblical figures including Adam and Eve and their children are mentioned as are angels, which are all products of Christianity. The whole film itself, whether it mentions it or not, is still based on the Bible and Christian ideas, so there is still no escaping the religion itself. However, several pieces of Noah's story from Genesis have been tweaked so it can be said that it is inspired by the Bible, but not a biblical film. This is one way which this film was always going to be a big ask for Aronofsky, as there was never any doubt that it was going to be a huge challenge to keep the majority of people happy. Of course you can never please everyone, but having more people like it than dislike it was always going to be the goal.

So all controversy and conversations of who believes in who and what aside, does Aronofsky's translation of Noah work well on the screen? It depends on which way you look at it. If you do want a retelling of the version of Noah which we have all come to know, it is adequate. The first hour of the film is very slow moving and not overly interesting. It is when the flood comes that the film becomes it's most intriguing. The first half of the film also see's the inclusion of the Watchers, which are a very strange inclusion in the film. The Watchers, although meant to be a version of angels trapped on Earth in stone like bodies, look more like a cross between Transformers and the Ents from The Lord of The Rings. Their physical appearance seem incredibly out of place in the film. On the other hand, if you see the film as being about Noah the man, it is quite intriguing. Again, the psychological state of Noah doesn't really become main theme until the second half of the film and that is when things become really interesting as we start to see that Noah is just a man with strong emotions. The only suspense (because let's face it, we know what happens to the world as a result of the flood), is seeing what becomes of Noah and if he is strong enough mentally to cope with the challenge he is presented with. 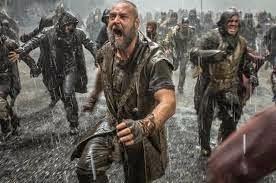 Noah was always going to be a visually challenging film. Not challenging for the viewers, but challenging for the film makers to do what needs to be done to make it realistic and spectacular. The flood scenes are the ones which were going to have the most emphasis put on them by the public as that is the event everybody associates with the name Noah. These scenes are quite spectacular, as you would hope they would be. They are powerful and all that you would hope these scenes would be. Some of the panoramic landscape shots of before the ark is built as quite beautiful, but some of the techniques employed and editing for presenting them are off-putting. Fade to black is overused and can become irritating while the family are travelling across the land, and the cinematography of the stream as it winds throughout the land feels very out of place. What is amazing is that no animals were used in the filming of Noah, which is truly incredible. There are some animals which are obviously computer generated, but some others which look so lifelike that it is a shock to think they are not as they seem.

Russell Crowe does do very well as Noah. Although this is not really a huge stretch from many of his past roles, he still plays the role very well. His best moments are towards the end when Noah really starts to first become more aggressive and then collapses under his guilt. When Noah starts to show his emotions, that is when Crowe really starts to give a great as opposed to a good performance. Jennifer Connolly is also very good, but just like Crowe, has her best moments towards the end of the film. Ray Winstone, who plays Tubal-Cain is terrifying. He is a truly great villain as you feel real hatred towards him, but he just is so good at what he does.

While Crowe may be the lead man, it is Emma Watson who is the star of the film. She is absolutely wonderful in Noah as the girl who is in love with Shem and is loved as a daughter by Noah and Naameh, but feels she is a burden on the family and Shem, especially considering she is infertile. Watson's performance is so emotionally charged and she makes a huge connection with the audience as they feel her pain and cry when she cries. This is Watson's best performance to date and she is the one in the film people will remember when they talk about this film. Logan Lerman also does well, but he really only has one scene which is considered powerful.

Noah is a memorable film, but not because it is a wonderful film. It is a great conversation starter for it's background, rather than for it's content and this isn't what makes a great film.