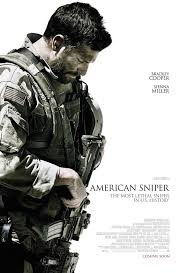 American Sniper opens in Australian cinemas on January 22 and is distributed by Roadshow Films. Now showing in the United States and United Kingdom.

Almost two years after his death, ex-United States Navy seal, Chris Kyle has been given a heroes tribute in Clint Eastwood's American Sniper. It is a tribute which is somewhat troublesome for individual audience members for varied reasons and although Bradley Cooper and Sienna Miller give fine performances, the film does not succeed in achieving the optimum combined level of captivation and enjoyment. The result is a film that will do very little for those who are unentertained by war films and will unsettle and distress others.

Texan born Navy seal Chris Kyle (Bradley Cooper) is recognised as the deadliest sniper in American history with over 160 confirmed kills and many more unconfirmed during his four tours to Iraq. His time as a seal saw him exposed to the evils of the world and his time in duty was as dramatic for him as it was for his wife, Taya (Sienna Miller) waiting for him at home. As distressing and deadly as the war is, Kyle finds himself not mentally able to leave it even when he is at home and safe with his family.

With American Sniper, Clint Eastwood has made a rather patriotic film about the man the Navy tagged "Legend", which like many biopics has been amplified for dramatic effect. It is a film which is problematic for various reasons and different people will relate to a different reason as to why they did not completely take to American Sniper. Firstly, the film wastes no time in establishing that one of it's motives is to create an incredibly tense atmosphere which will no doubt shock, unsettle and distress many audience members. The majority of the scenes which are used to demonstrate the evil and terrors of war are extremely confronting and often quite graphic, yet they are also not historically accurate and included in the film purely for dramatic effect and shock value. The problem with this is that it is not a welcomed suspense that is created and makes for an uncomfortable experience and considering these events (such as the first scene and The Butcher torture scenes) are not completely factual, there is no point for this. 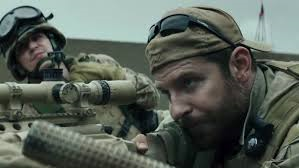 What American Sniper lacks is a firm sense of balance. The film covers both Kyle's life on the battlefield and at home with his family so there is an understanding that Eastwood is trying to make a film about war that doesn't discriminate against those who are not typically fans of war films. However, the scenes in the Kyle household are not strong enough nor do they have enough time donated to them to ensure this. The scenes in Iraq are very well made with some incredible location shots and brilliant sound editing, but no matter how strong and tense they may be, do not entertain those who do not admire war films. Yet for those who do admire war films, it will almost feel as though the scenes in the United States take away from the action.

This all being said, one can still understand what the film is trying to do and say. This may be a biographical film about Chris Kyle, but it wants to be a film which any soldier and their family can relate to. As is shown with Kyle, the war doesn't end for the participant and their family when they return home. The horrors they have seen stay with them long after they have left and affect their everyday life. Many find the only way they can combat this torture is to go back on tour, much to the dismay of their families.  A husband going to war is a battle for any army wife, as it is a time of emotional torture filled with constant anxiety. Eastwood is trying to make American Sniper as relatable as possible for families who are directly effected by war and show that although Chris Kyle was tagged a hero and legend, his battles away from Iraq are much the same as anybody else's.

Bradley Cooper gives a flawless performance as the late Chris Kyle. In a performance which is also physically demanding, Cooper brings an incredibly human quality to the well known naval figure. He allows people to see his character as a human being who was not as cold-hearted as his occupation may suggest, but one that was emotionally and mentally effected by him actions. Cooper's performance is strong, controlled and quite wonderful. Sienna Miller is also very good and gives perhaps the best performance of her career thus far. Her Taya could be any army wife and the on screen chemistry between her and Cooper is perfect.

American Sniper is strong minded as it knows exactly what it is trying to achieve, yet is not executed strongly enough to achieve this. The film will strike a cord with any family member who has been personally effected by war, but is not a particularly enjoyable experience for those who cannot relate.