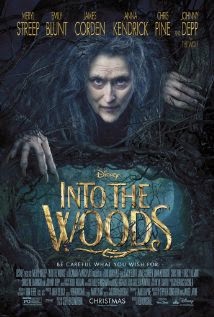 Into The Woods is now showing everywhere and is distributed by Walt Disney Pictures.

Disney's venture Into The Woods may not be the same feel good live action film the world is accustomed to seeing from the studio, but does not fail to entertain audiences, especially those who are fantasy and musical lovers. While Rob Marshall's film is a lot of fun with it's witty and enjoyable screenplay and musical numbers, it is also rather unexpectedly deep and metaphorical. The film does a great deal more than just impressively recreate some of the most loved fairytales and in doing so is pleasantly surprising in numerous ways.

A married couple who live and work in a bakery (Emily Blunt and James Corden) are desperate for children, but are unable to conceive. They are at a loss as to why this is until one day the Witch from next door (Meryl Streep) arrives and tells them that she placed a curse on the household long ago and to break the curse they must bring her all she desires. The baker and his wife set out into the woods to fetch the red cape from Red Riding Hood (Lilla Crawford), the hair as yellow as corn from Rapunzel (Mackenzie Mauzy), the glass slipper from Cinderella (Anna Kendrick) and the cow as white as milk from Jack (Daniel Huttlestone) for the Witch. When all is said and done, it looks as though everyone has had their wish fulfilled and will live happily ever after. However, that is not the way things work out for any of them as they all venture into the woods once again together.

Director Rob Marshall and writer of both screenplay and musical (which he co-wrote with Stephen Sondheim) James Lapine have done a fine job of adapting Into The Woods for the screen. This is what audiences must remember when judging Into The Woods. It is adapted from a stage musical and much of what can be said about the story good or bad relates more to the original musical than the adapted screenplay. One of the aspects of the film which reminds you that this is so is the notion that Into The Woods feels like two different films in one. The only reason it feels like that is because there are two acts in the stage musical and they are of completely different atmospheres. Because of this, people not familiar with the musical will feel as though the film is quite lengthy, which at barely over two hours this is hardly the case. The majority of the screenplay remains true to the original Into The Woods, yet several songs were abandoned for the film (while one song was added to the soundtrack) and the dark atmosphere slightly lifted so to make a more family friendly film. 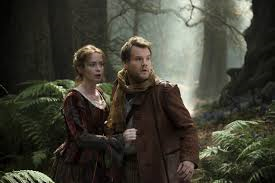 Into The Woods knows it's target audience well. The film is well suited to lovers of fairytales and musicals, as those who do not appreciate musicals will not enjoy the fact that the majority of the storytelling is told through song. However, Into The Woods is saying a lot more to it's audience than is vocalised through the dialogue and lyrics. The overall theme is the universally acknowledged notion that there is realistically no such thing as a happily ever after. There is such thing as perfect for the time being, but no life or love is forever without some sort of complication. Fairytales install in children unrealistic expectations of the world, which is why the film reminds us that children are listening, so be careful what you tell them. The story takes fairytales to a place they are not traditionally taken to by asking the questions no one asks of them. Why did Cinderella really run from the man she loved? Was Rapunzel ever troubled by losing the woman who raised her? Is Prince Charming really the man he makes every one believe he is, or is he really just charming? The title of Into The Woods is literal, but also metaphorical as walking through life can be like walking through the woods in its unpredictability and terror.

The mash-up of the fairytales is very well done, but some stories are given a lot more love and attention than others. In particular the Rapunzel storyline doesn't have a great deal to offer and is almost non-existent in the second half of the film. However, it is understandable that at least one of the stories within the film was going to be limited as the film's running time needed to be kept in mind, especially considering this is a family film. Yet, the screenplay is extremely witty with brilliant dialogue and entertaining and enjoyable musical productions, especially the elegant "On The Steps of The Place" and hilarious "Agony". The production design is absolutely exquisite with very little CGI used and the film is very atmospheric as the woods are designed with an air of mystery and darkness that is felt by the audience.

Into The Woods boasts an impressive cast with performances that may surprise. Emily Blunt and James Corden work very well together on screen and their relationship is comedic in the most realistic of ways. Blunt appears in her first musical role and stuns with her beautiful singing voice. Anna Kendrick is certainly no stranger to musicals with her Broadway background and past roles in Camp and Pitch Perfect (as well as the upcoming sequel to the latter and The Last 5 Years), but truly shows her vocal range and is exquisite as Cinderella. She is incredibly likable and the most naturalistic Cinderella to grace the screen.

Meryl Streep does not disappoint as the Witch. She is full of character and shows another side to the Witch who lives in these fairytales, which is that of a Witch with a past that has shaped her. Chris Pine is a real surprise packet as Cinderella's Prince Charming. It is a completely different role for Pine and hearing him sing is surprising, but not a terrible experience at all. His performance is formed around a parody of fairytale princes and is really quite amusing. Young Daniel Huttlestone, who plays Jack, is also a standout with incredible acting ability and a lovely voice.

While there is a moral to most stories we tell our children, what Into The Woods has to say about life through the way the fairytales are told is a great deal more helpful and insightful. The film is surprising, but pleasing for many reasons, but won't delight those who don't enjoy musicals as much as those who do.