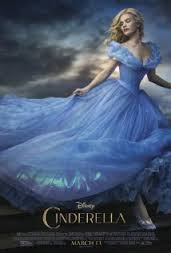 Cinderella will open on Australian cinemas on March 26 and is distributed by Walt Disney Studios. Now showing in the United States and United Kingdom.

Disney's Cinderella is a lovely, charming adaptation of the beloved children's fairy tale. Rather than follow the trend of classic stories being retold with a difference, it stays true to the original story with many references to the 1950 animated film, which is ironically refreshing. Ella (Lily James) is a beautiful girl who lives in her family's country manor with her bereaved father (Ben Chaplin) in a faraway kingdom. In his last attempt of happiness and before his last fateful trip, he remarries and leaves Ella with an unloving stepmother (Cate Blanchett) and two horrid stepsisters (Holliday Grainger and Sophie McShera). Ella experiences only heartbreak and hardships at the hands of her new family, but a chance encounter with the kingdom's Prince (Richard Madden) brings her happiness and when the ball is announced, she dreams of attending although her stepmother will do everything in her power to prevent this from happening. With the arrival of her Fairy Godmother (Helena Bonham Carter), Ella does indeed become the belle of the ball.

Cinderella is Disney doing what Disney does best, putting the magic back into a story that deserves a little pinch of fairy dust to make it sparkle in the present. Even though the film doesn't bring too much new to the story, it is quite an exquisite adaptation which works as well in live action as it did animated over 60 years ago. It is a film that will delight families and lovers of fantasy. The thing is with a film like Cinderella is that one goes into the film knowing what to expect so there is no need for disappointment in the story or for the film being what it is. It is a light, simple story with classic themes which include courage and kindness.

Kenneth Branagh's retelling of the fairy tale stays true more than anything to the original Disney film from 1950. Much of the film is as though the characters have jumped out of the animation and into live action, with many of the colour schemes of the costumes in both films mirroring each other, the animals having the same names and the Fairy Godmother's magic words being "Bibbidi-bobbidi-boo" amongst other similarities. Yet Chris Weitz's screenplay does allow for background information on the characters which gives a greater understanding as to how and why things came to be. Ella was born a beautiful girl, but the reason she has such a beautiful nature is because she has abided by her mothers dying words everyday of her life which has moulded her into the person she is. These small differences to the traditional Cinderella flesh out the story and characters in a way which enhances the screenplay and keeps the story interesting while paying tribute to those that came before it. 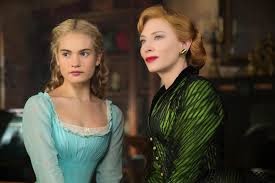 Visually Cinderella is every bit the magical fairy tale. The production design of every location is absolutely exquisite and every part of the kingdom from the royal castle to the town markets are wonderfully designed. The costume design is incredible, particularly Ella's ball gown which is everything you would want it to be. Sandy Powell, who has been nominated for ten and has won two Academy Awards for her incredible talent in costume design, has once again done a phenomenal job. The pivotal moment in the film when Ella is transformed from simple into her ball-ready self is awe inspiring and so beautiful visually that is can bring at tear to one's eye. The cinematography and beautiful visuals of the film work perfectly together to create that magical atmosphere which is so craved in a fairy tale remake.

In what is surely a star making role for lead Lily James, she is physically everything one would hope Cinderella to be. Her performance is fine and is clearly what has been asked of her, but her character is somewhat troublesome. Despite the explanation of why she is so carefree and happy even in the most difficult of situations, Ella can sometimes lack the human quality she would need for one to truly connect with her. This isn't to say that she does not have emotional moments in the really moving scenes, but her passive and whimsical nature is on the exaggerated side where it becomes unbelievable. True this is a fairy tale where we should be leaving our sphere of reality behind, but belief should still lie in the characters emotions.

However, James works well on screen with her co-stars, particularly Cate Blanchett and Richard Madden who both give fine performances. Blanchett does exceptionally well as the Stepmother who's character could have been well overdone and exaggerated, but is more cold and ambitious rather than truly evil. Richard Madden as the Prince is actually a wonderful surprise. Not only do he and James have wonderful chemistry, but his character is one that is truly likable and also rather deep. He and Derek Jacobi share a truly beautiful scene of a father and son understanding each other for the first time. Helena Bonham Carter is also a charming treat as the Fairy Godmother who adds comic relief to the film, as does the hilarious cameo by Rob Brydon.

Cinderella is a exceptionally beautiful and charming retelling of the timeless classic. It does not attempt to change anything about the original, but rather flesh out the humanity behind the characters and remind people why they love this fairy tale so much. It will definitely be a favourite with little girls, but has plenty that other members of the family will appreciate.