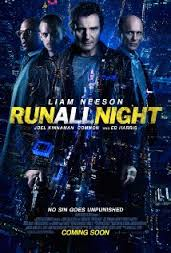 Underneath it's hard exterior of action and suspense, Run All Night  is a dramatic film about the ties between family and friends that just misses it's emotional calling but is nevertheless entertaining. One time hit man, Jimmy Conlon (Liam Neeson) is haunted by the ghosts of his past to the point where he is unable to function in daily life. The only person he can still depend on and call a friend is mob boss, Shawn Maguire (Ed Harris). By a terrible twist of fate, Jimmy's estranged son, Michael (Joel Kinnaman) witnesses Shawn's son, Danny (Boyd Holbrook) shoot a man dead and Danny wants to make sure Michael keeps his mouth shut by doing the same to him. In order to save his son, Jimmy instead takes Danny's life, which forces Shawn's hand to go after Michael to even things up with his long time friend.

Run All Night has an interesting basis and one that could push the film in the direction of a psychological thriller. The opportunity was there for the film to express the internal battle the characters of Jimmy and Shawn should have been feeling having to do something so atrocious to people they are personally connected to. It is something that is touched upon to an extent, but Run All Night wants to focus primarily on the action and suspense. It succeeds in this department as the film is indeed action packed and thrilling, but would have gone from being a mediocre film to a very good film had there been a greater emotional connection to the characters and their situation.

Yet the family dynamics between the Conlons and the Maguires make an interesting case study. It is obvious who is the more responsible and loving son and it is the one who grew up with an absent father. Michael is incredibly hostile towards his father as he rarely saw him when he was growing up and left Michael and his mother to fend for themselves. He grew up to have a family he loves with two little girls and a son on the way and is an active member of the community. On the other hand, Danny has little respect and love for anyone besides himself and following in his father's footsteps by participating in illegal activities. Yet, Shawn was present for Danny's childhood. Run All Night provides a demonstration of how children will learn from their parents and this is part of who they become. As Michael's dad was absent, he learnt how it felt to not have a parent present and made sure he was there for his family and for others who were without fathers. He was immune to his father's violent world and he played no witness to it, while Danny grew up watching and learning from his mob boss father. This is not a case to make for all parents and children, but an interesting one to contemplate from this film. 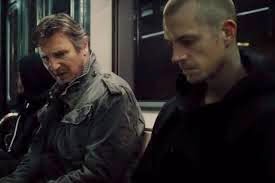 Visually Run All Night has it's own character and is unique in it's own way. It's attempts to do something different with it's cinematography and has no lack of continuous camera shots and editing that creates havoc within itself. It is admirable that there is the intent to try something different and it does succeed in doing this, but these attempts do not add anything to the film. In particular the style of editing employed may try to support the high speed intensity, but it is creating more of a sense of craziness and mayhem. The film has plenty of fast paced action sequences which are suspenseful when the film as a whole is largely predictable.

Run All Night is a film that would have truly benefited from an emotional attachment to it's characters through the right direction and allowances in the script. What meek attempts it makes of being sentimental are lost in weak performances by fine actors. There is absolutely no doubt that Liam Neeson, Ed Harris and Joel Kinnaman are capable of delivering stronger performances with the desired level of emotion which their characters should have been granted. All the actors give borderline performances that are not bad for any reason, but not wonderful for a greater reason.

As an action film, Run All Night does enough to make itself watchable and enjoyable. However, the subject content not only allows for more, but demands more to be given as far as you can't be talking about killing your best friend's children in emotionally controlled circumstances.