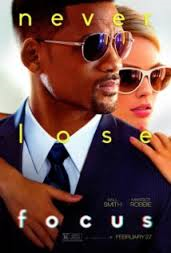 Focus opens in Australian cinemas on March 5 and is distributed by Roadshow Films. Now showing in the USA and UK.

Although Focus often resembles artistic mayhem and confusion, it may be exactly the movie experience that cinema goers are craving for. While it wants and tries very hard to be smart, sassy and stylish, its falls short but remains fun, witty and entertaining while doing so. When amateur con, Jess (Margot Robbie) meets big time con, Nicky (Will Smith) she begs him to teach her his methods and to accept her into his glamorous world of trickery. The two soon find themselves not only working together to increase their fortunes, but also in a romantic sense. Yet, Jess can never figure out what is real when it comes to Nicky's affections and his intentions.

Focus is a long way from being a flawless film, but it is remarkably entertaining and enjoyable due to the screenplay's original execution and it's constant surprise element. The film has the nature of the con artist and the audience plays the role of the unsuspecting victim as they are confidant in knowing what is occurring, but this is what the film wants them to feel while it buries the truth under multiple layers. Focus is particularly unpredictable, but at the same time does not have a clean cut story as it's screenplay is more concerned with the surprise element rather than a smooth execution. The actual story is not as enthralling as the twists which it provides.

However, the film does indeed install an unexpected sense of paranoia in it's audience. With the methods of deception employed by the characters in order to carry out their operations, one realises how simple a theft of one of their possessions such as a wallet or phone may really be. Some of the bigger con jobs in the film are not quite as scary for the everyday person, but seeing the simplest of thefts occurring just in a jolt from a stranger is frightening enough to make you suspect everyone when you leave the cinema. 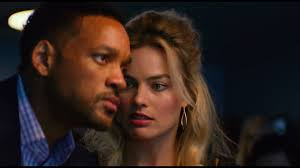 Visually Focus is absolute havoc. Editing which is attempting to appear stylish comes across as jumpy and uneven. The vast array of entertaining and fun images throughout the film are projected onto the screen with a wonderful use of colour, but the way in which these images are arranged and the choice of music to accompany them does little to enhance them. The musical score feels over used and overdramatises particular moments in the film to produce humour at undesired intervals.

The pairing of Will Smith and Margot Robbie is somewhat problematic. The two do fine jobs in their roles as individuals and are really perfectly cast as their characters. However, the lack of romantic chemistry between the two is extremely evident and makes the scenes that should be steamy between the two not so. As individuals, Robbie has the upper hand on Smith as she plays her role of Jess with greater emotional conviction. Smith still does well and remains likable throughout the film despite his downfalls.

Despite it's faults, Focus is a fun time to be had. It contains a great deal of unpredictability thanks to it's twists and turns that it can be forgiven for it's downfalls with great ease and just enjoyed for what it is.