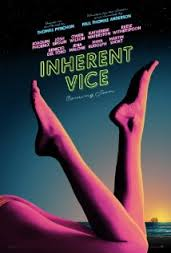 Based on the novel of the same name by Thomas Pynchon, Inherent Vice is a wonderfully unique and nostalgic journey back to the very early days of the 1970's when Los Angeles was experiencing a change in identity. Larry "Doc" Sportello (Joaquin Phoenix) is a detective living the hippy lifestyle who the officials, including Lt. Det. Christian "Bigfoot" Bjornsen (Josh Brolin) ridicule and his friends rely on. When he is visited by ex-girlfriend, Shasta (Katherine Waterston), he becomes caught up in a web of illegal activities and cover ups in a world where everyone he meets is somehow connected. However, when Shasta goes missing, it all turns personal for Doc.

Paul Thomas Anderson's adaptation of Thomas Pynchon's novel is a fine one. Anyone who has read the book will find that the film mirrors the book in the best of ways and Anderson has overcome the features of the book that may have been problematic in the process of adaption with style. However, the novel "Inherent Vice" is one that has divided opinions which inevitably leads to the film being quite the same way. Many people enjoyed the novel for it's nostalgic and vivid imagery, but Pynchon's writing style and method of storytelling can be troublesome for others. Those who are troubled by the latter will find that the screenplay is much like the book and therefore will not understand the attraction that others feel to it as they will feel that there is too much going on with too many characters. The psychedelic drug fuelled and sexual nature of the film will also take away from the enjoyment of other viewers. Yet with an open mind, Inherent Vice is a lot of fun and rather hilarious. The script is incredibly witty with colourful dialogue and there are plenty of laugh out loud moments.

However, Inherent Vice lacks the thing that one has come to expect from an Anderson film as such and that is the presence of impressive cinematography with amazing visuals. The film is nostalgic and very atmospheric of the times, but the one thing that is missed in the film as opposed to the book is the love felt for the Los Angeles landscape. It feels as though an opportunity is missed in this respect, as Pynchon's book lovingly created these vivid pictures of Doc's home beside the sea. These lingering shots of the featured locations are missed, but the nostalgia is created by the costumes and production design which add to the overall atmosphere of the film. The soundtrack is also completely fitting for the year of 1970 and is unique in the way that it isn't a compilation of over played songs from that era. 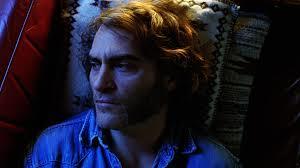 While Inherent Vice provides a visually nostalgic imprint of Los Angeles in the year of 1970, it is also a snapshot of the times with a focus on a type of prejudice that was brand new. Throughout the film, the character of Doc is continuously ridiculed and insulted for being a hippy and living the lifestyle associated with being a hippy. The two girls of his life, Penny and Shasta were both once part of the hippy lifestyle, but they have both cleaned themselves up to seem more respectable in society and Penny in particular makes it no secret that she has conformed. This hippy hate in Los Angeles was the doing of Charles Manson and his band of followers known as The Manson Family. When the murders that shook Los Angeles were committed by this group of free spirits under Manson's spell, hippies were no longer seen as the innocent members of society they once were, but as sinister and a mark on society. Of course we see in Inherent Vice that this was not true of all hippies as there is nothing sinister about Doc and the movie does a fine job at demonstrating society's view on this sub-culture at this point in time.

The colourful characters and their wonderful dialogue are brought to life by way of perfect casting and fine performances. Joaquin Phoenix is truly brilliant as Doc Sportello. Phoenix brings a very natural comedic style to the role which is neither forced nor dull and it is a style which is perfect for the character. His character of Doc is incredibly likable and despite how much verbal abuse he receives throughout the film from almost everyone, remains so laid back (whether that be with some support) and harmless. It is a role which one can imagine Phoenix would have had a great deal of fun with as he is a real treat to watch.

Josh Brolin is also tremendously entertaining as tough talking cop, Bigfoot Bjornsen. Brolin's memorable character arguably gets some of the best lines in the film and is truly hilarious. Joanna Newsom, who's character Sortilege acts as narrator, does a wonderful job of holding her own in the film and is the personification of the typical carefree Californian girl of 1970. Benicio Del Toro and Owen Wilson are also very funny and entertaining.

Inherent Vice is not your average comedy and is completely unique. This uniqueness will be too quirky for some, but an open mind will lead to a rather fun experience at the hands of Paul Thomas Anderson.