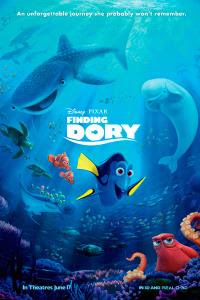 Finding Dory is now showing in cinemas everywhere and is distributed by Walt Disney Pictures.

The long-awaited Finding Dory is marvellously fun and sweet and whilst not being quite as emotionally powerful as Finding Nemo, basks in the glory of it's stunning visuals and colourful characters to remain highly entertaining and enjoyable.

We once again meet the endearing blue tang fish with the unusual ailment of short-term memory loss, Dory (voiced by Ellen DeGeneres) a year after she first meets her closest friends, clownfish Marlin (Albert Brooks) and his son, Nemo (Hayden Rolence). She is living a happy, fulfilling life in the reef with her friends until she quite abruptly starts to remember fragments of her forgotten childhood and realises that she was only very young when she became separated from her doting parents. Marlin and Nemo agree to join her on her quest to find her loved ones which will take them across the ocean to the California coast where they meet new colourful and quirky friends.

Finding Dory is an incredibly charming and sweet movie which takes the elements which made 2003's Finding Nemo work and replicates them, but perhaps not with the same intensity. Finding Nemo appealed to such a broad audience and remains a Disney favourite of many because of it's stunning animated visuals, wonderful characters and obvious, but adorably relatable themes. Finding Dory grasps the first two of these fan favourites almost as well as the first, but unlike Nemo doesn't have a human story gift-wrapped in tropical fish. The 2003 film was the story of a father knowing when to let go of his son, but also showing the power of parental love and instinct. Finding Dory is the reverse with Dory trying to find her parents in a situation caused by her memory loss which is far less relatable to the greater part of the audience. 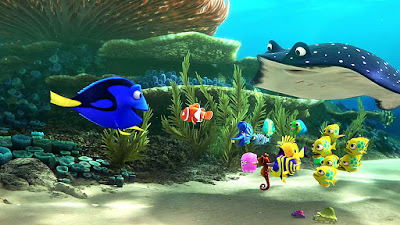 It was the relatability of Finding Nemo that gave it the emotional edge that made it an instant Disney Pixar classic. While this aspect is missing from Finding Dory, it is still particularly strong in every other area. The film's location of the Marine Life Institute, an oceanic research facility with theme park elements allows writers, Andrew Stanton and Victoria Strause the freedom to be original with the screenplay and bring in a cast of new and enjoyable characters. The animation, much like the original, is absolutely stunning with the brilliant use of colour used to create the world under the sea and the life on the shore.

Ellen DeGeneres does a fine job in her second outing as the endearing Dory, but it is the new characters which steal the limelight. Finding Dory is flooded with new characters who have big, colourful personalities which are built on their physical characteristics and the stereotypes of their species. Dory's ability to speak whale is cleverly explained by introducing whale shark, Destiny (voiced by Kaitlin Olson) who has a sight problem as a result of her natural head shape. With Destiny comes Bailey (Ty Burrell), the beluga who believes he has been injured because of his head shape and has lost his self esteem as a result and cannot send or receive signals the way his breed of whale should. The sea lions (as voiced by Idris Elba and Dominic West) on the rocks outside the institute also provide a great deal of comedy relief.

True to the reputation of sequels, Finding Dory doesn't quite capture the all-encompassing magic of the original, but is nevertheless a sweet, pleasant experience that does entertain and delight.