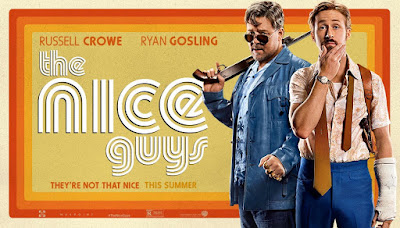 The Nice Guys are showing in cinemas everywhere and is distributed in Australia by Roadshow Films.


Shane Black's The Nice Guys is a hilarious and enjoyable trip back to the 1970's that may not have an air-tight screenplay, but is forgivable as what it lacks in strength of story it makes up for with it's highly entertaining and witty sense of humour.

After the mysterious death of a Hollywood porn star, licensed PI Holland March (Ryan Gosling) and private eye Jackson Healy (Russell Crowe) find themselves on opposing sides of the aftermath. While Healy is trying to protect a young girl involved by the name of Amelia (Margaret Qualley), March is trying to hunt her down. Once the two work out their differences, they decide to work together to help protect Amelia and solve the case that involves the underground film industry and the dark side of the city's government with the help of March's young but wise daughter, Holly (Angourie Rice).

The Nice Guys see's director and co-writer Shane Black working with a formula that has worked so well for him in the past. It is not a formula he exclusively relies on in his screenplays, but the male duo fighting crime in Los Angeles is an obvious favourite for him to have as the basis for his films as we have seen in the Lethal Weapon films and 2005's Kiss Kiss Bang Bang. The Nice Guys is another variation of this with our heroes or antiheroes being a product of the tired, but atmospheric city of Los Angeles in the 1970's. The scenery with it's offbeat and eccentric characters offers a wonderful backdrop to this story of crime and corruption with elements of comedy, action and drama woven in. 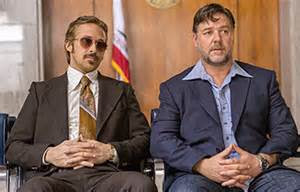 While the screenplay may not be as tightknit as it should be with several obvious unrealistic and unexplained aspects being included just to move the story along, this can be overlooked and at times even forgotten. It is the comedy, unrelenting and often violent action scenes and nostalgic backdrop which supports The Nice Guys and makes it well-paced and enjoyable. The film is indeed very funny and is enhanced by the underrated comedic ability of Ryan Gosling. However, the comedy does at times feel forced and not as though it is a naturally flowing part of the scene and yet then there are other scenes that involve situational humour (such as the early scene in the bathroom) which are almost relatable.

The Los Angeles featured in The Nice Guys is one which is very tired. The town was in the period after the Golden Age where much of the glitz and glamour had left Hollywood and what was left over was a sleazy, grimy town that still had a golden streak through it where the fortunate and those still aiming for fame and fortune congregated. The introduction to this town in the 1970's is perfectly embodied at the beginning of the film with the aerial shot of Los Angeles over the neglected and unpolished "Hollywood" sign which was once a symbol of the city of dreams, but by the 70's might as well have been the symbol of a town of broken dreams. Everything from the wonderful costume design by Kym Barrett to the production design by Richard Bridgland and the enjoyable musical soundtrack is perfect for the times and creates a distinct feeling of nostalgia. 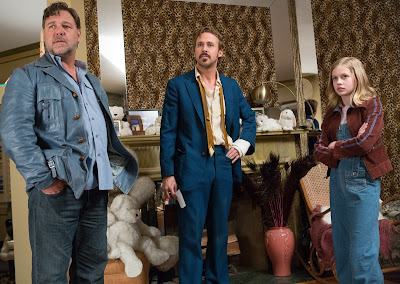 In a film such as The Nice Guys which is built around a working partnership between two characters, chemistry is absolutely crucial. Russell Crowe and Ryan Gosling work extremely well together on screen and balance each other out perfectly. The two characters are carefully crafted with interesting background stories that explain why they each possess certain character traits. Ryan Gosling's Holland March is certainly the more interesting of the two as he has a tragic background story. Yet in the person he has become because of these circumstances, he embodies the persona of a tragic clown where his unhappiness and instability paves way for comedy.

Angourie Rice gives a spectacular breakthrough performance as Holly March, who is also quite an intriguing character. Barely a teenager herself, she has resumed the role of the woman of the house and supports her father with all his misgivings and doesn't see the world through rose-coloured glasses. Yet despite all she sees, she still maintains an air of innocence and naivety and it is because of this that Rice gives an exceptionally strong performance of this adult in a child's body.

The Nice Guys takes a simple plot that has been seen many times in cinema over the years and rejuvenates it with Shane Black's unique sense of humour and an accurate and atmospheric depiction of Los Angeles in a time past.