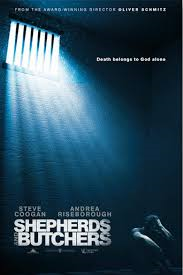 Based on the novel of the same name by Chris Marnewick, Shepherds and Butchers is an exceptionally powerful film that is extremely graphic and intense in a way that is needed in order to understand the complexity of it's story.

Set in South Africa in 1987, lawyer Johan Webber (Steve Coogan) is given the case that nobody else wanted to defend a young prison guard named Leon Labuschagne (Garion Dowds) who shot dead seven men. While the unwanted case seems completely hopeless to Webber, he soon realises that while there is no denying the fact that Labuschagne did commit this crime, he was not in sound mind when it occurred due to extremely unhealthy and traumatising working conditions he was made to partake in while still a teenager. The case soon turns to make Webber and the jury question not whether he was guilty or not, but whether Labuschagne was also one of the victims.

Shepherds and Butchers asks the boldest of questions in the most powerful of ways. Capital punishment was abolished in South Africa in 1995 by Nelson Mandela, but many of the questions asked by the characters openly and silently still ring true today. The obvious question is what justifies killing and who's hand is it by in such a situation as capital punishment, but the major question which is often subtely implied and other times not quite so is what makes a victim. The victims of the case are the seven men who will killed on the road that night by Labuschagne, but then Labuschagne is also seen to be a victim as he was thrust into an unforgiving and horrendous job when he was only 17 years old and as a result has suffered greatly from it. Then the same can be said for his lawyer, Johan Webber as he has here been made to take a case that he nor anybody else wanted and is judged harshly for doing his job and feels affected by it, so he is also a victim. 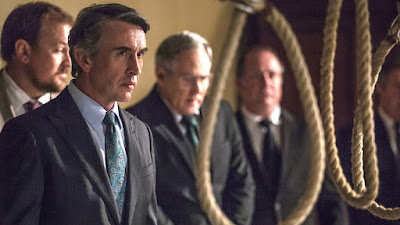 The story of Shepherds and Butchers is an intriguing one to begin with as it makes one question so many things, but the film built around the story is what truly makes it so strong and powerful. Flashback scenes in cinema can often be problematic as they do not always achieve the desired effect and can often do more harm than support. Yet here they are employed in exactly the right way and are one of the reasons why the film is so strong. The flashbacks Labuschagne has are blended into his testimony in the courtroom with superb use of sound which intensifies an already stressful situation. These flashback scenes are graphically realistic and not for the faint-hearted as they do not allow one to believe that death (in this case capital punishment) was a clean business or that one could not be affected by witnessing and partaking in it.

Both Steve Coogan and newcomer, Garion Dowds give incredible performances which are as strong as the film around them. Dowds gives an emotional performance as Labuschagne and has the audience immediately feeling sorry for him as his torment is apparent right from the very first scene. His controlled performance is breathtaking and incredibly intense, especially when he is on the stand in the courtroom. Coogan's performance is also very strong in a role which is unlike his usual comedic persona. While he tries to get his client to break, he himself is getting closer to breaking point and the way his performance builds in strength during the film makes one feel as though he is a bomb ready to explode.

Shepherds and Butchers does not hold back in it's delivery of story which is psychologically and ethically challenging, but in doing so is unforgettable and wonderfully intense unlike many courtroom dramas.