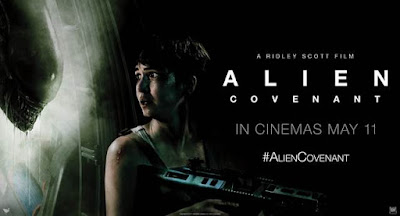 Alien: Covenant will open in Australian cinemas on May 11 and in cinemas in the United States on May 12. Distributed by 20th Century Fox.

Alien: Covenant takes the Alien franchise back to it's place of origin and does so in bloody and terrifying fashion which will delight loyalists and confuse and disgust non-familairs.

Ridley Scott's latest is the follow up to 2012's Prometheus, making it the second in the prequel series of the Alien films. Alien: Covenant resembles the Sigourney Weaver led Alien films a great deal more than Prometheus did, which should excite people as Prometheus was criticised by many for how little it resembled an Alien film. However, Prometheus was a smart origins story and more of a companion piece to the franchise rather than a prequel. Alien: Covenant could not exist without Prometheus, as much of it's story is directly connected to it. It goes without saying here that anyone who has not seen Prometheus will not benefit at all from seeing Alien: Covenant as there will be a great deal that is not understood or appreciated.

The newest film in the Alien universe has already been criticised for having too much happening in it and that it should be as simplistic as it's predecessors were. Yet, Alien: Covenant does not pretend to be a straight forward action film. It picking up where Prometheus left off and still attempting to tell the origin story of these horrific extra-terrestrials, while at the same time being suspenseful, terrifying and action-packed.

Unfortunately, at times it does feel as though the film is trying a little too hard to be visually shocking by using as much blood and violence as possible to get the point across and there are several times throughout the film where the CGI isn't as realistic as it should be, particularly in the outer space sequences. Yet the recreation of the aliens using CGI is superb and this is one area that has benefited from having the universe expanded in 2017.

One of the things that Scott has excelled at since he and screenwriter Dan O'Bannon created the Alien universe back in 1979, is incorporating female empowerment into the futuristic world of horror. Sigourney Weaver played the incredibly bad-ass Ripley in all the Alien films up until Alien Ressurection in 1997 and it is argueably her most iconic role. Ripley was a hero ahead of her time and sadly, it is only now that females are starting to play a more powerful role in action films...although we admittedly still do have a long way to go.

While Noomi Rapace was at the helm in Prometheus as Elizabeth Shaw, it is Katherine Waterston who follows in the footsteps of her and Weaver and plays Daniels in Alien: Covenant. With this film, Waterston continues to impress with her talent and versatility. Her character develops throughout the film by at first seeming vulnerable due to the sudden death of her husband (who is played by James Franco in a not uncharacteristically tiny cameo), but shows how she takes that grief and uses it as motivation to keep those around her from harm. She is strong-willed, the voice of reason and not afraid to get the most dangerous jobs done.

Waterston as the female lead is not the only piece of stellar casting. When Kong: Skull Island was released earlier this year, one of the most disappointing things about it was that it had a fantastic cast who's talents went to waste as a result of a lack lustre screenplay and direction. Alien: Covenant does the opposite. The film makes the most of it's talented cast even though the majority of the characters are underdeveloped and given little to no background. The exceptions here are, of course, Waterston's Daniels and Michael Fassbender's Walter/David. Fassbender does a strong job of playing two different roles and his David is the most interesting character in the film, but his very existence attempts to tackle the now very tired and overused sci-fi theme of artificial intelligence manipulating humans.

Ridley Scott once again does a great job at continuing to make the Alien franchise one that supports female empowerment and makes sure that Alien: Covenant succeeds in doing what it sets out to achieve, which is to entertain and terrify.