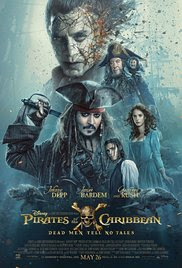 Pirates of the Caribbean: Dead Men Tell No Tales is distributed by Walt Disney Pictures and will open in Australian cinemas on Thursday May 25 and in the United States on Friday May 26.

How did we ever get a fifth Pirates of the Caribbean film?

14 years after we first met Johnny Depp's eccentric buccaneer Captain Jack Sparrow in The Curse of the Black Pearl, the franchise is still plodding along with impressive box office returns, but unable to hold a candle to the original first film. The good news is that while Pirates of the Caribbean: Dead Men Tell No Tales may be blatantly imperfect, it is nevertheless entertaining, enjoyable and a rewarding return to the spirit of the first film.

The Pirates of the Caribbean franchise has it's fair share of critics and those who wonder how in the world it got to a fifth film, but it's loyalists understand the fascination with the series and why Jack Sparrow continues to intrigue. One only has to look at the inspiration for the original film to understand it's staying power.

The Pirates of the Caribbean ride at California's Disneyland was opened to the public on March 18, 1967, which was 12 years after the park was opened and it was the last ride which Walt Disney himself had a hand in designing. Despite the New Orleans Square ride being one of the oldest in the theme park, it has drawn steady crowds since it's opening and is still considered by many to be  their favourite Disney attraction. The Pirates ride is by no means the best way to get your adrenalin pumping at Disneyland, but the boat ride which takes you through the wild and scandalous Audio-Animatronic world of the Caribbean never fails to delight park-goers.

The reason for the ride's ongoing success is that the concept and world of pirates has and always will excite and intrigue. Along with that unmistakable Disney magic, this is exactly why the film franchise is still going strong and attracting audiences over a decade later. In recent times, Disney are the only one's who have been able to successfully convey the dark and dangerous world of swashbuckling pirates to the big screen and combine it with the light-hearted humour and enjoyment that makes pirates simultaneously fun and thrilling. They do this so successfully that a fifth film is not surprising nor a terrible idea.
Despite the worry that the franchise was starting to tire, Dead Men Tell No Tales is the strongest in the series since the original film. Depp returns as Captain Jack Sparrow to search for Poseidon's trident with new allies, Henry Turner (Brenton Thwaites) and Carina Smyth (Kaya Scodelairo), when an old and menacing enemy, Captain Salazar (terrifyingly portrayed by Javier Bardem) reappears.

The new film is far from flawless with it's complicated story that is initially hard to follow, it's tendency to be goofy rather than funny at times and evident holes in it's screenplay (much like The Curse of The Black Pearl). However, it is nevertheless entertaining, enjoyable and painless viewing. As well as being perhaps the most visually attractive of the franchise so far with it's incredible special effects, cinematography and production design, it rewards the loyal Pirates of the Caribbean fans by building on the stories of past characters (including Orlando Bloom's Will Turner) and giving more background to others, specifically Jack Sparrow and Geoffrey Rush's Captain Barbossa.

While the resounding question is made about whether Pirates of the Caribbean is still relevant, the same is undeniably being said about Depp and his Captain Jack Sparrow. After Depp was nominated by the Academy for his portrayal of the beloved antihero in The Curse of the Black Pearl, the screenwriters for the past four films (including Dead Men Tell No Tales) have given his character many recurring quotes and eccentricities...many of which have become tiresome and lack the amusement they once did. Depp is fine in Dead Men Tell No Tales and truth be told, starts the film a great deal more irritating than he finishes it. However, the inevitable question is whether it is now time for Depp to hang up his pirate hat and say goodbye to Captain Jack Sparrow?

For many the answer would be yes...but there would almost certainly be no other pirate protagonist quite like Jack Sparrow. Love him or hate him, there is no one quite like him and it would almost be impossible to reimagine a character like him to lead future Pirates of the Caribbean films..presuming there will be more. The reason fans will be praying for me is the fact that Dead Men Tell No Tales only scratched the surface of Jack's past and there is so much still to be told.

However, one would also not be disappointed for another film if Paul McCartney was to reprise his role as Uncle Jack, as it is undoubtedly one of the best scenes of the film.

We may not have needed a new Pirates of the Caribbean film, but Dead Men Tell No Tales is a thoroughly entertaining and rewarding experience for those who have stuck around hoping that the franchise is able to return to the glory days of The Curse of the Black Pearl.