Seattle International Film Festival: Yourself and Yours (2016) film review

Yourself and Yours is reviewed as part of our Seattle International Film Festival coverage by our reviewer on the ground, Anna Chu.

Yourself and Yours, a film by prolific South Korean filmmaker Hong Sang-soo, is an intimate fly-on-the-wall view into the lives of two young people, who seem to know each other, but yet not at all.

Youngsoo (Kim Joohyuck) is furious at his girlfriend Minjung (Lee Youyoung) after hearing stories about her drinking with other men and without him. Minjung leaves him once she is confronted, which sends Youngsoo into a downward spiral of despair and longing for Minjung but ultimately a realization she is the one for him. However, the journey we take with Minjung is one of possible mistaken identity - is the girl we see on screen her mysterious doppelganger? An identitical twin? Is she actually Minjung? 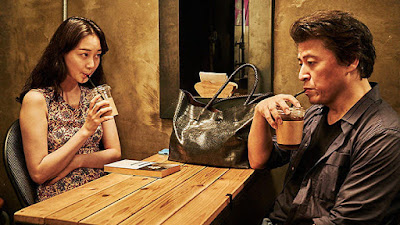 I left the theater thinking this was going to be a tough story to retell without sounding like I was completely crazy for enjoying it.

In South Korea, female beauty is desired, sought and bought. All things considered, it is probably likely that Minjung has a lookalike hanging out in coffee shops and bars around Seoul. However, it becomes painfully obvious that this is not the case. Minjung is deliberately deceiving these men, pretending to have never met them before. The men she meets explain they're attracted to her innocence, yet she is anything but. It's unclear, even at the end whether it was intentional on her part to pretend she was someone she wasn't, or was she haphazardly swinging a bat at anyone to see if she could finally make contact with a real connection?

I'd never see Hong Sang-soo's films before, but this film I found super interesting. Part improv, part scripted dialog, in a recent Hollywood Reporter interview, he says 'I’ve come to the point where I start with almost nothing'.


This became very apparent to me, as I kept looking for clues to figure out how the movie was going to end. There are things that come into frame - store mottos, a lingering of a store mannequin being undressed - that make you think "what was that for? Do I need to recall this later?" There is a moment in the final scene that catches you off guard, as you got so comfortable with Youngsoo's fantasy scenes. There is a beautiful surprise that it is his reality. That is why I left the film feeling fulfilled- it wasn't a film flailing wildly trying to make a point. Yet what it was I'm still not sure.